5 June 2022, Scottburgh. The Brink Racing Team of David Low and Dean Wortmann won the KAP sani2c nonstop in 13 hours, 25 minutes and 10 seconds. They crossed the finish line less than a minute ahead of Team FRIB who had led the race up until a navigation error in the last few kilometres. Team FRIB was made up of Steven Holm, Jarrad van Zuydam, Rick Diesel and Darryl Irvine, finishing in 13:26:07.

Starting at 2am on Saturday 4 June, the KAP sani2c nonstop mountain bike endurance event covered just over 250kms on much of the KAP sani2c route from Underberg to Scottburgh, all within a 24-hour cut-off period. 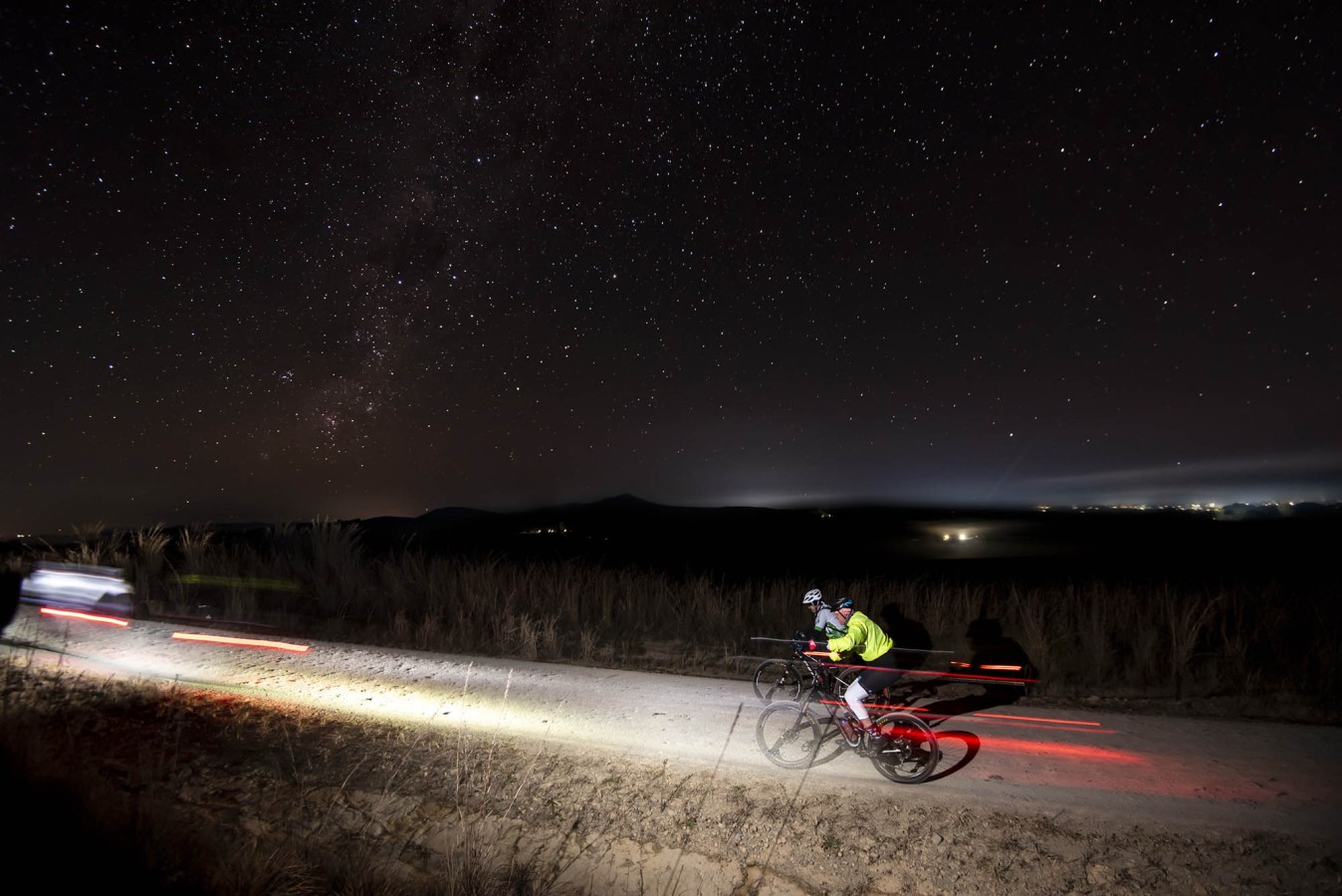 With a 2am start at Glencairn Farm near Underberg, riders were treated to a sky full of stars over the Drakensberg.

Brink Racing Team’s David Low says they were a bit surprised to win the race in the end: “It was a bit of a sprint finish with the leading team at the end. From before the drop into the Umkomaas Valley we were jostling with them but then they dropped us so we kept our own pace. We saw them at each of the checkpoints heading off but we were both so tired. It was probably the hardest thing I have done on a bicycle.

“The best was dropping into the Umko and watching the sunrise. We usually start the Umko when the sun is already up a bit but this, seeing the sun peeping through the mountain, was absolutely mindblowing. It’s so quiet, you can hear the river at the bottom thundering and the birds chirping. They don’t call it the mighty Umko for nothing, it was stunning dropping in there,” David says.

The strongest team of the race was Team FRIB. They led for most of the race, but two kms from the finish they made a navigation error and followed a flag that was apparently from a trail race in the area. Rick Diesel says: "We had trained really hard and were hoping to do well and we rode consistently, so we thought we had it in the bag, and then we made that error. That was very disappointing, but it was a really good adventure and a great race. We had a really good team and gelled well together. 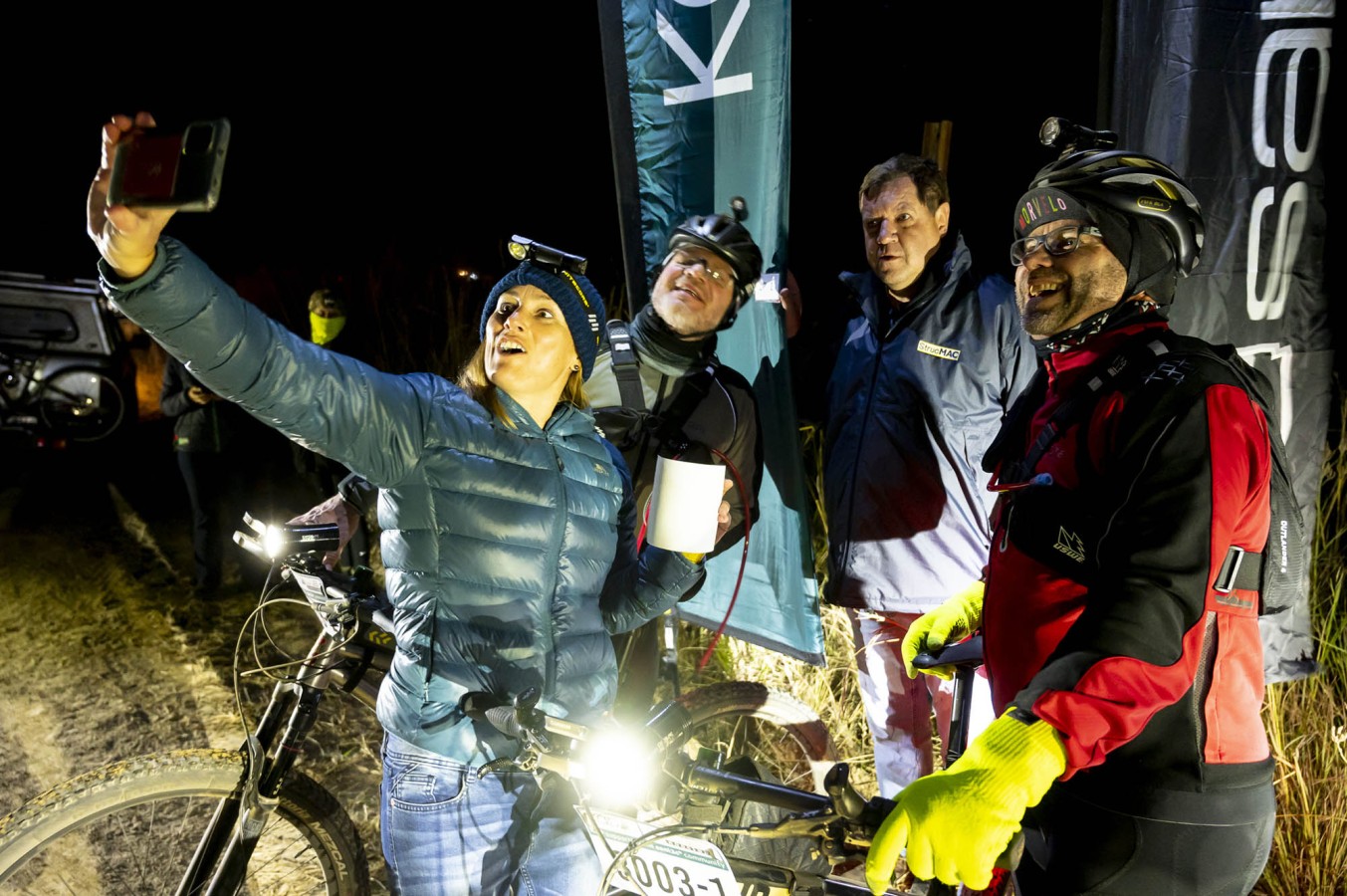 Each team made up of 2-4 riders and a support driver, had to take a selfie at the various checkpoints and send it through to the race organisers.

"Three of us had done sani2c before and we've all done Joburg2c so we knew the area and the route quite well. But I've never done anything like this. I've done Transbaviaans and other 100 miler races but nothing quite as tough as this, with the climbing and the single track. The single track makes it really hard, when you're 10 hours in and you hit a technical section, and there was way, way more climbing than in other endurance events. Some of that climbing, even though the last stage is shorter, comes at the end.

"It was a great experience. I think starting in the dark adds depth to it. Normally where you'd be  looking around and counting down the kms, you're just in the dark and focused on that. To hit the Umko at sunrise was just magical. I don't think many people get to do that in their lives - we were the first team down the Umko so to have a free run was just incredible."

About their team dynamic, Rick says: "We knew that everybody would be in a dark place at different times, and we just said everyone must communicate early if you're not feeling great. There were points where I was getting pushed up climbs, but then later, I felt good so then was pushing the others. The mix worked really well and we still had a laugh and some jokes along the way.”

Rick's wife Fran Diesel and her friend Adele Lourens played the support driver role. She says: "There were so many points, 15 including the finish. The drive distances were varied, they were roughly 10-20 kms each time, so we would drive maybe half an hour. And the guys would be riding about 15-20 kms, but to get to that point in time to get everything ready was a challenge. Then once they were through we had to pack everything up and get to the next point - there was no rest and we barely ate, until we were starving. It was quite challenging, but actually loads of fun. 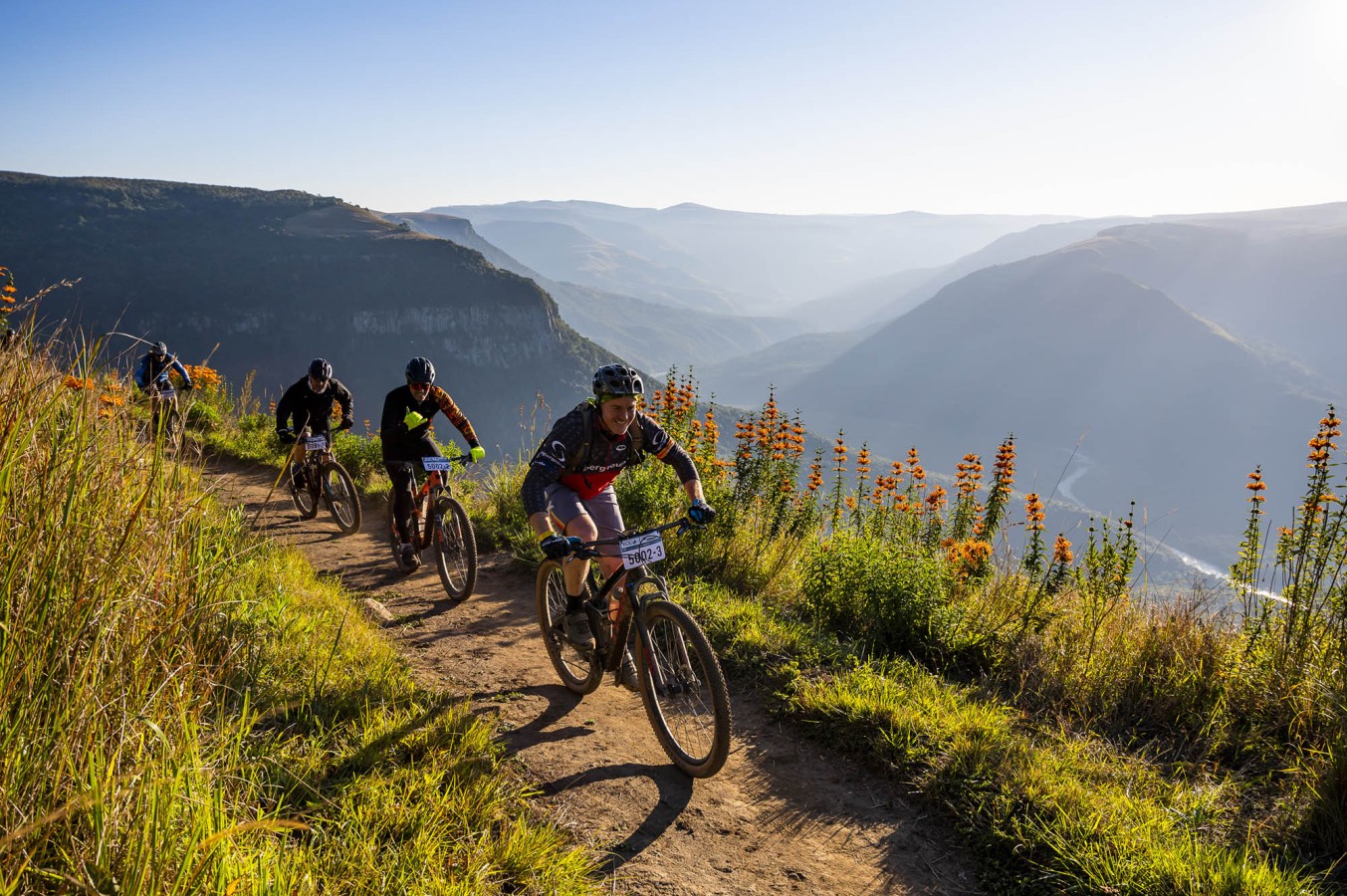 Riding into the Umkomaas Valley at sunrise was a highlight for most riders.

On navigation, Fran says: "We used the printed book they gave us at registration which worked well. Adele did the navigation and we followed it to the detail and it took us to exactly where we needed to be. Some of the routes off the main road you just had to trust the directions and then we'd take some random dirt road - but then in the middle of a field there would be the flag. It's exhausting, definitely, but you get to go places you normally never go to - it's actually such a privilege."

Team Full GAS, made up of Graham Parker and Stephen Prowse, were the third team in, in a time of 13:50:02. Not far behind them were two teams that rode together, The Bombay Bicycle Club team of Owen Gandar, Michael Jamieson and Lance Kime (13:51:14) and Team sani2c of Andrew Houston, Bianca Haw and Damon Duncan Stamp (13:51:23).

Graham Parker says: “The other two teams reached us at the last checkpoint, so just when we thought we could take it easy the last 10-15kms we were motivated to keep pushing. This way we had something to ride for which was nice actually.

“For me it was the nicest event of any I have done, I really, really enjoyed it and the night riding was phenomenal. You are always riding at 70% because you can’t go 100% over such a long distance, so you get to look around and enjoy it.” 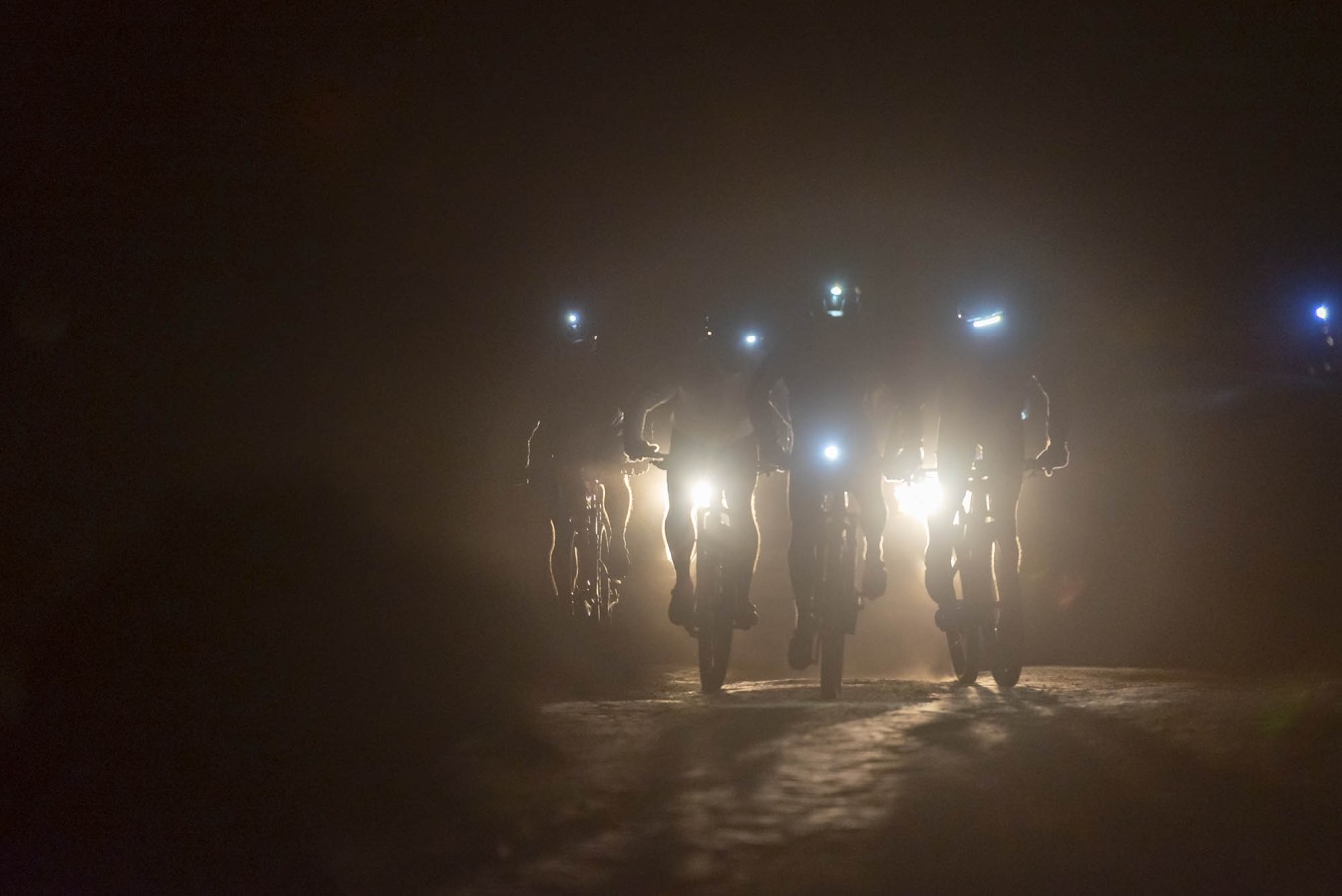 Good headlamps were an essential tool for the first 4 hours of the race.

Riding partner Stephen Prowse, “The tranquillity of just Graham and I riding through the forest at night was astounding. The supporters were very much part of the team which was great and as the race went on the supporters were together and also had to push to get to the next checkpoint, they were all racing each other.

“At first I questioned the wisdom of so many checkpoints but I get it now and its part of the challenge. Having the forced stops also means you manage your nutrition better.  You would probably say to your seconders see you in two hours, but this way you are forced to eat.”

Lance Kime, of the Bombay Bicycle Club Cycling team who were fourth, says their team and the sani2c team were riding as one team but had to enter two teams as there were six of them. An experienced Adventure Racer, he says: “The early morning start at 2am suited me, with a few hours of dark and riding into the light and looking forward to the morning, where I struggle with the early evening and before midnight on adventure races.

“We considered ourselves one team and the dynamic was incredible, better than any adventure race I have done. When you’re tired someoone is helping and when you’re strong enough you’re helping out, it was seamless with everyone on the same page. The team aspect was incredible in this race.” 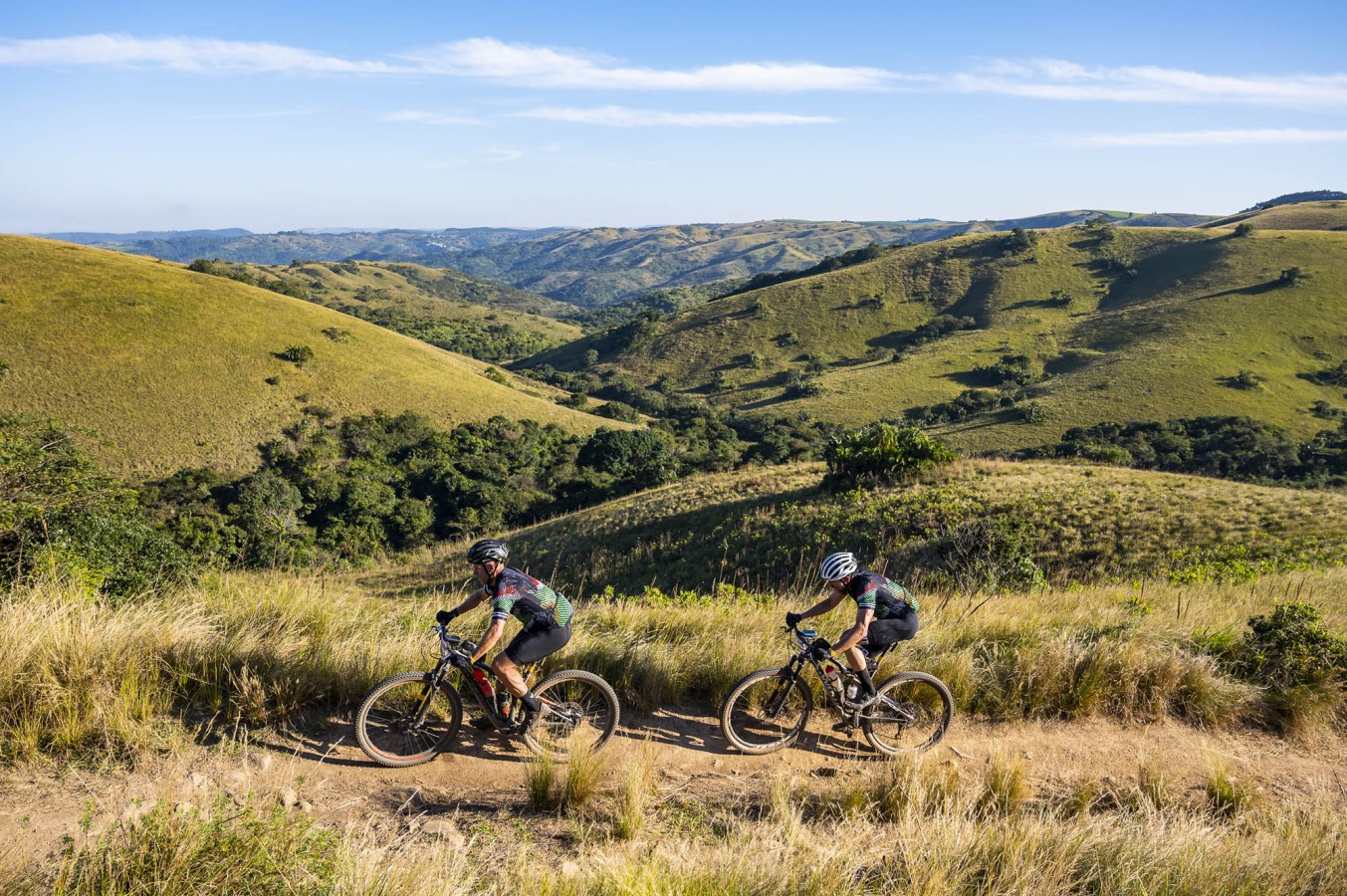 Vernon Crookes Nature Reserve tested riders on a section of the route that is usually part of day 3 of the KAP sani2c.

The Umko was incredible, we were there just before sunrise so we didn’t have the sun glaring into our eyes, we had that golden horizon dropping into the valley. The singletrack at night was a highlight - to ride well-groomed single track, living in the little world of your headlight and you have no idea what’s on your left and right, it was amazing. That last 40kms we were racing because of the other team that nearly caught us at Vernon Crookes, which ignited our competitive flare and we hammered it to the finish.”

Bianca Haw, the first woman rider across the line with Team sani2c, the fifth team overall, says: “The boys told me we were not racing at all, we were going to chill and go slow the first 150 kms. But they started racing from the start, I would never have done it with them if they had told me they were racing! They just couldn’t help themselves and got so excited, but it was cool,” she laughs.

“At Jolivet there was a team 15 minutes in front of us (team Full GAS) and there was one team just behind us that caught us at Vernon Crookes, so we took off and were having fun racing. Riding the singletrack in the dark was such fun, as long as you had a good light.” 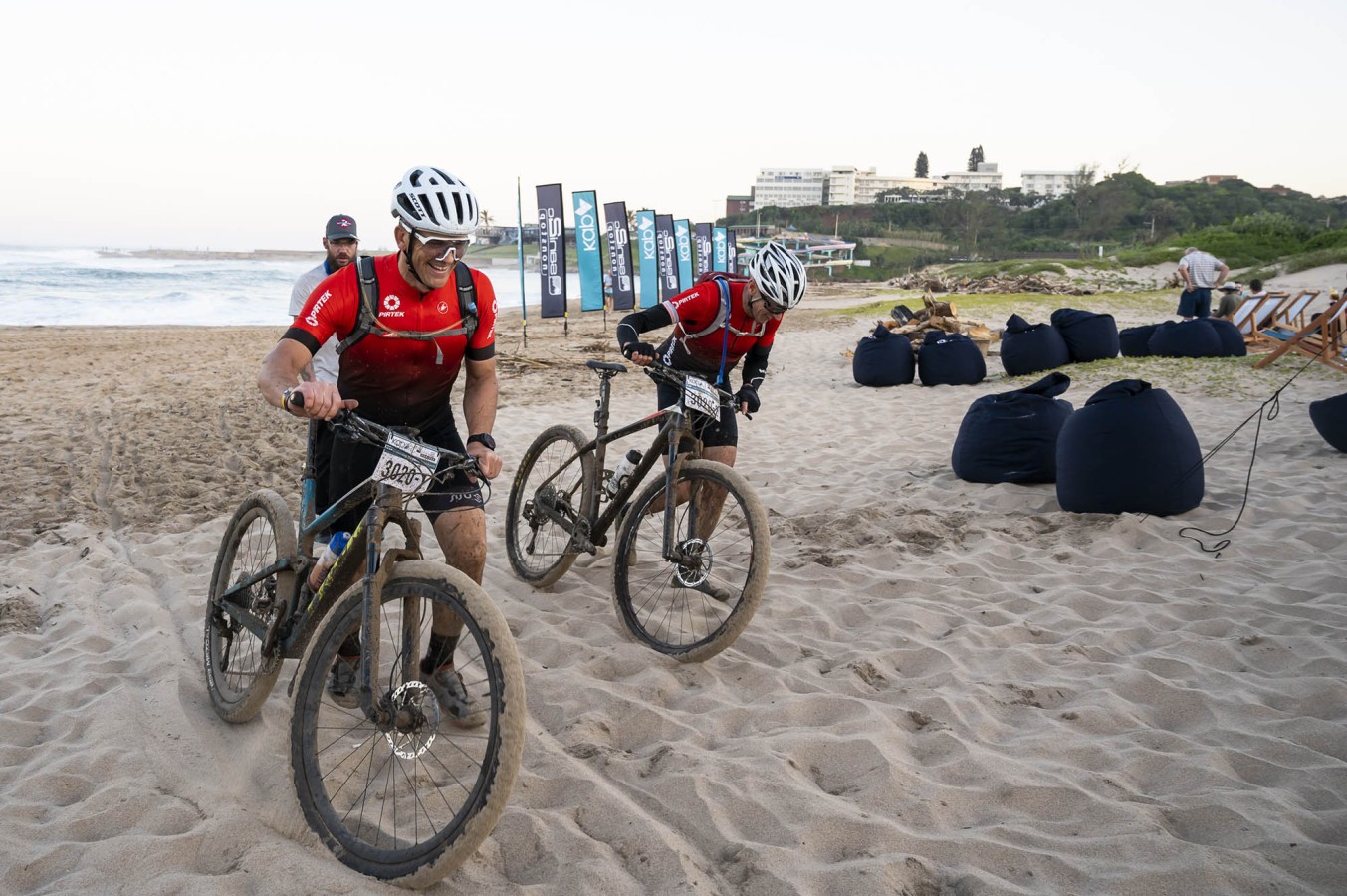 Riders finished on the beach at Scottburgh, the fastest riders finishing in over 13 hours, and the last riders crossed the line at midnight after 22 hours on the bike.

Founder of the sani2c, ‘Farmer’ Glen Haw, was thrilled with how the race went: “The last team came in just after midnight, and we have had such good feedback from riders, who all seem to think it’s the hardest thing they have done. They were properly tired but both the riders and the supporters seem to have loved it. We included many checkpoints for the support drivers which meant they were really part of the team and also had to keep going nonstop.

“I think this is something different that mountain bikers are looking for. We don’t want nonstop to be the hardest for the sake of being the hardest race, but there are so many sections that are great fun but that make it really challenging,” he says.