The 18th edition of the KAP sani2c was a great success. After the recent floods in KwaZulu-Natal, the sani2c team had to double up on efforts to prepare the route, and in doing so they managed to get the trails in the best condition they have ever been in.

Since 2005 when ‘Farmer’ Glen Haw had the first group of people riding from Underberg to Scottburgh over three days to raise funds for a farm school, the KAP sani2c has been thrilling riders and bringing communities together, creating an event that has grown to support 23 schools along the over 260kms of trails. 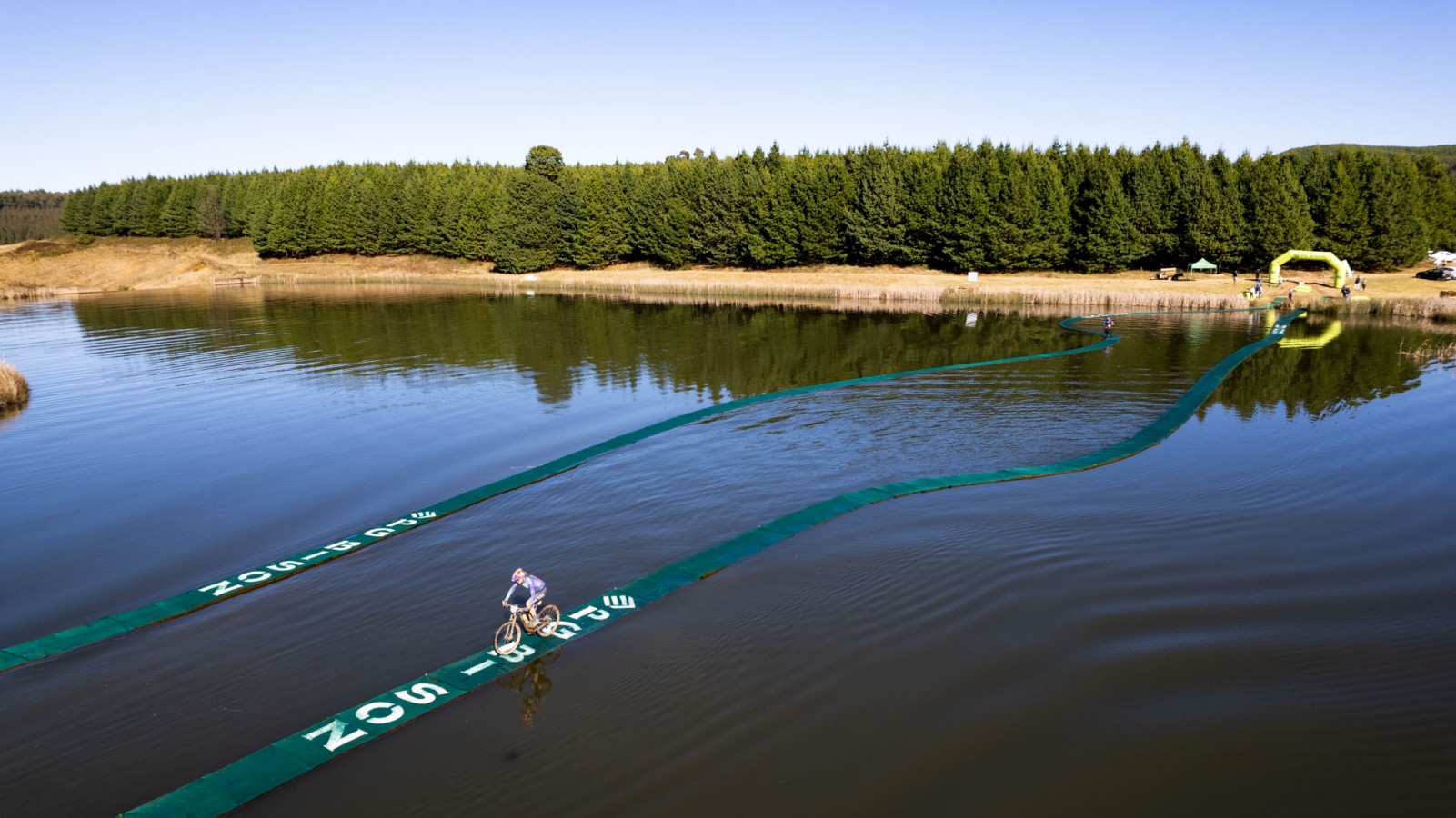 Handcrafted singletrack forms a large proportion of the route that includes a breathtaking descent into the Umkomaas Valley, known as the Umko Drop, and the Iconic Climb out of the valley. For most mountain bikers in South Africa, the KAP sani2c is a bucket list event, and for a lot of riders who do their first sani2c, it is the start of a journey of many sani2c experiences.

Sue Seddon did her first KAP sani2c this year and says she was blown away by the level of organisation and effort that went into it. “Every detail was considered. I started riding during COVID to escape my many running injuries and now I’m hooked! I rode with my husband Pete who has done it twice before.”

On day two Sue and her partner had multiple punctures so they were stuck behind slower riders for a while: “Nevertheless, I was grateful to be able to appreciate the beautiful scenery and the huge amount of effort made to create the trails. The Umkomaas Valley has to be the highlight; the switchbacks were probably the most challenging for me and I came off one of them while trying to eat a hot cross bun! I also very much enjoyed the Woody’s burn section; exquisite scenery.

“Our third day proved best of all; an open trail and no mechanicals. It was thrilling from start to finish; the sugar cane route was pure bliss followed far too soon by Clint’s Climb where we rapidly overtook a lot of fatiguing riders. ‘Work to be’ done was short and sweet and the rest was a race to the end!” 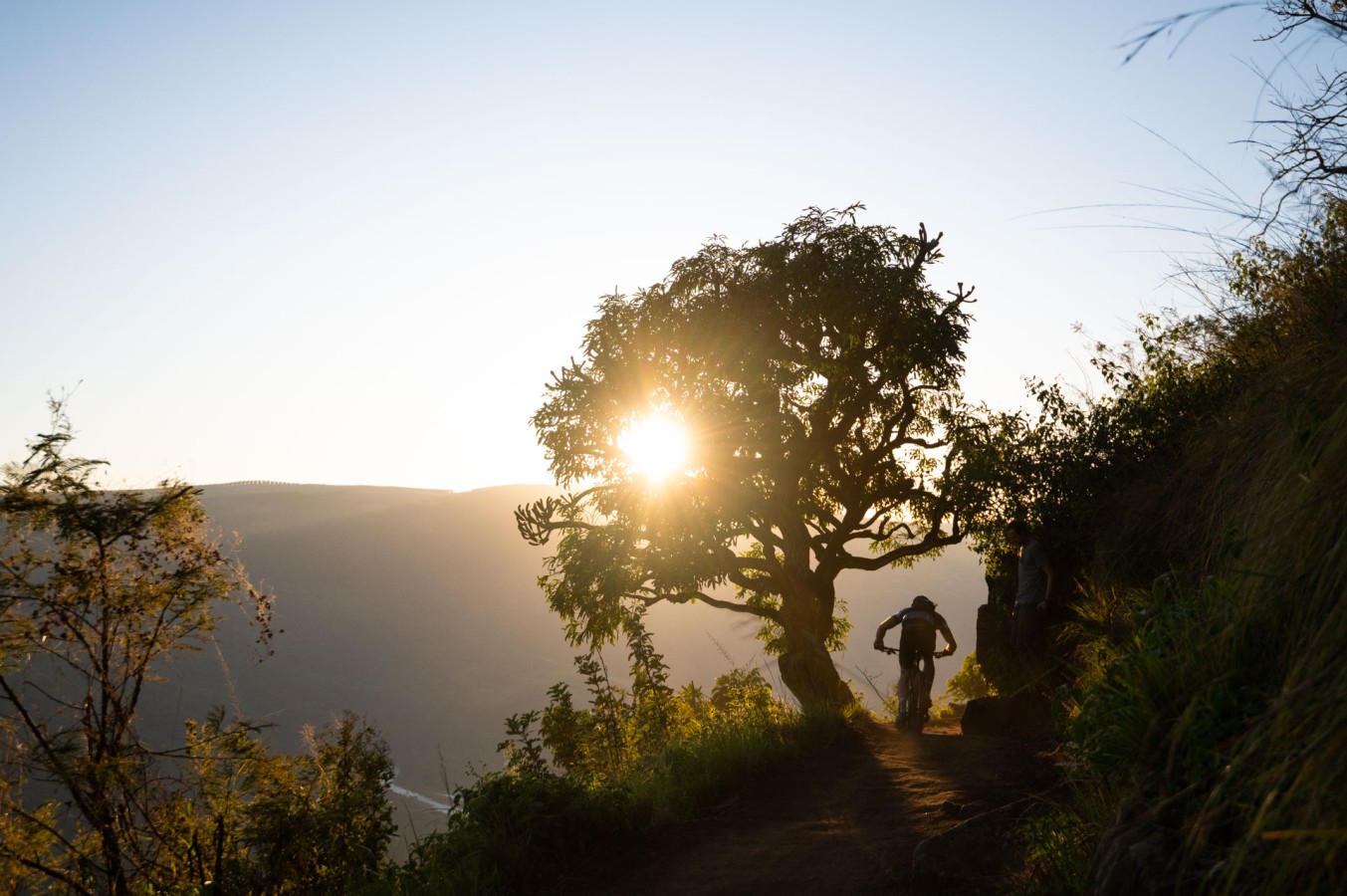 The famed Umko Drop on day 2 has riders descending into the Umkomaas Valley as the sun rises.

Shaun Rosenthal did his 10th sani2c and joins the Black Mamba Club. When you finish your tenth sani2c you receive a special individualised cycling top and jacket.

“My overriding memory from the early days is how tough Day 2 was – up to [what was then known as] Nandos followed by A Push of a Climb. Also, the memory of the descent into the Umkomaas Valley and how involved and visible Glen was.”

Shaun says that the facilities have improved significantly over time: “Glen and his team have done amazing work and have taken into account rider feedback to improve the route every year. We come back for the great singletrack, amazing scenery and the opportunity to spend quality time with good friends.” 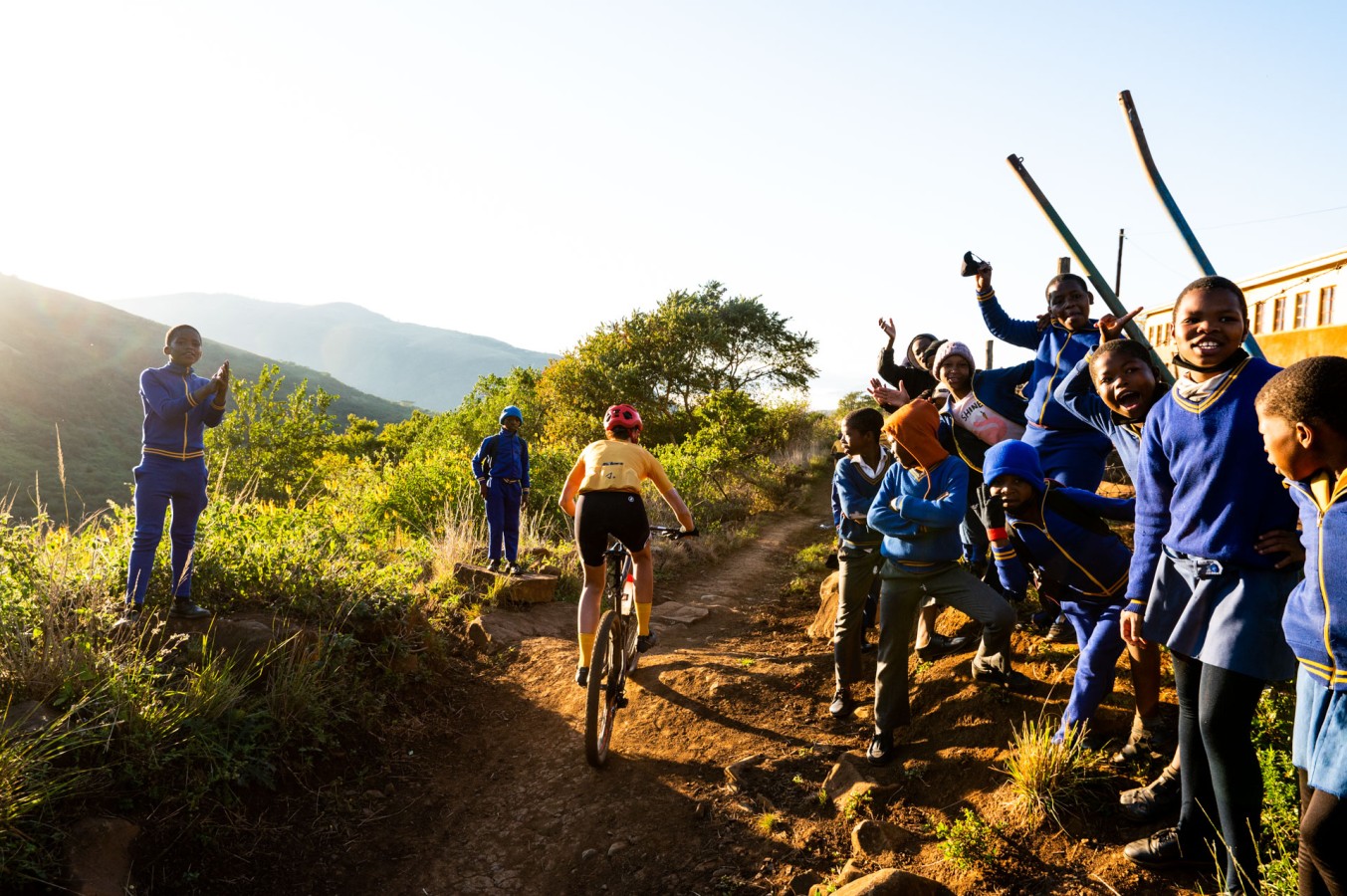 23 schools on the sani2c route are beneficiaries of the event. School children line the trails to greet riders on many sections of the route.

Shaun says that the highlights this year were the singletrack on day 1 and the school kids at the day 2 finish at Kings Harvest, where children line the road clapping and singing, and singing and dancing as the riders cross the finish line.

Sue Preston and Doug Abbey from Underberg also completed their tenth sani2c, having worked on the event as volunteers with Underberg Primary School in the early days and then securing their first entry in 2012: “The evolution of sani has been quite something,” he says.

“Its fascinating to think of how the route has changed over the years. And the very first pub, the Underberg School headmaster and I started that in the second year. We just bought some beers and sold them on a bench in the tent. The very first car shuttles, Sue put it together and we drove down 20 cars. And to see where it has got to now.”

“Your very first one, you don’t know what is coming, you just ride. I was 56 when we did our first sani. We were sitting at Jolivet on our boxes and we were filthy and tired after day 2, and I said ‘You know Sue, we are too old for this.’ And now we have done it ten times. After 5 times I said it was our last, and we have said that this tenth time will be our last, but let’s see.” 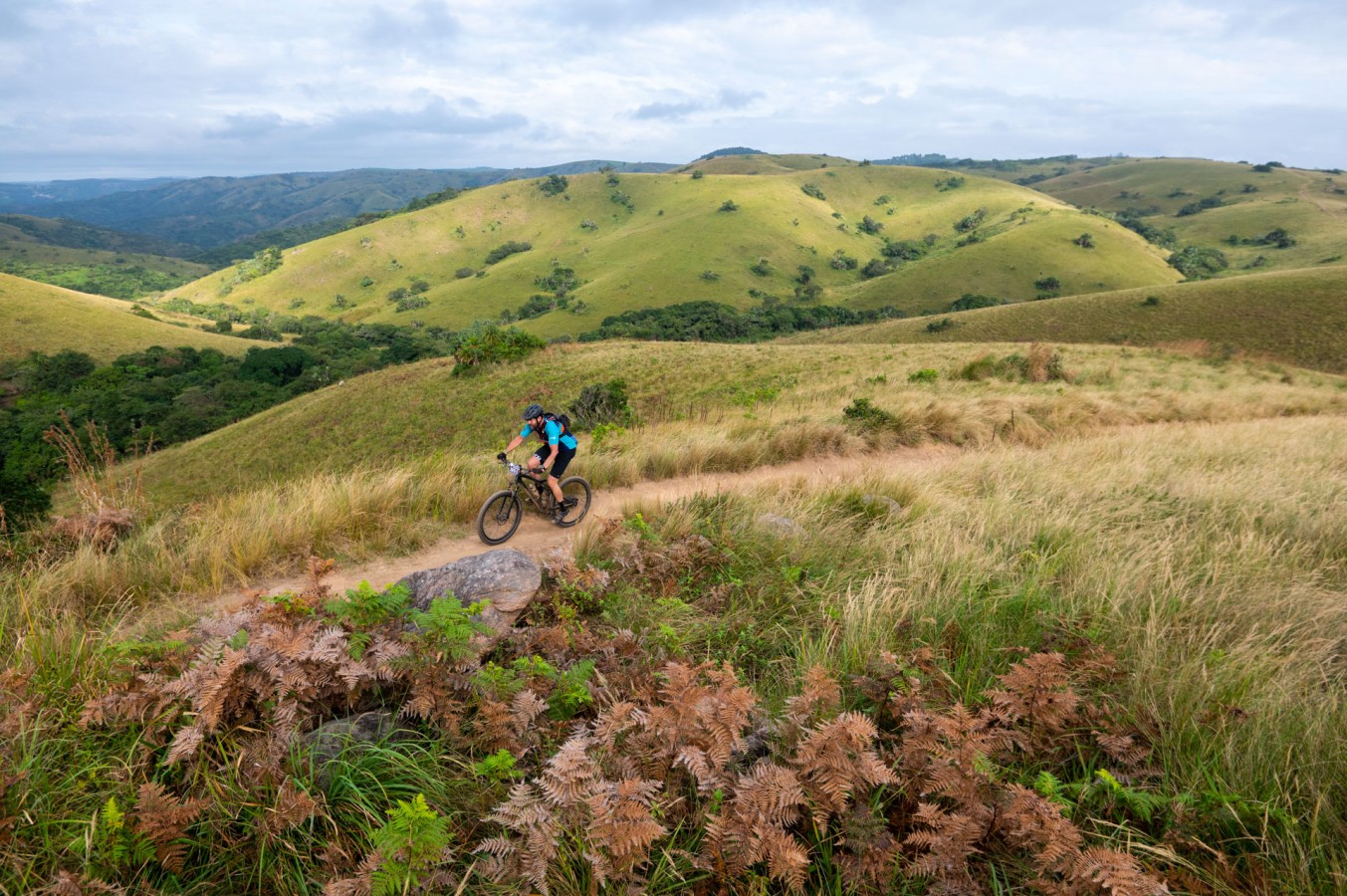 Vernon Crookes Nature Reserve trails were worked on extensively after the floods and are in the best condition they have ever been in.

Doug suffered a severe heart attack in March 2020 and the pair did not do the 2020 edition, which happened in December instead of May due to COVID; they worked at the finish. But by May 2021 Doug was back on the start line, with an e-bike. This sort of commitment to ride has become a common thread in peoples’ sani2c stories. He says the sani2c means a lot, over and above the cycling.

Stephen Burns from Hillcrest also became a Black Mamba at this year’s race, and he says his highlight was managing to get to the top of the Iconic Climb without having to put a foot down: “I did my first sani in 2012 and the one memory that comes to mind is the first time we entered "WOW" and the view of the Umko Valley. The organization and planning is on a different level; it runs like a well-oiled machine. I enjoy the challenge of sani2c, and it gets you away from the pressures of work for a few days”.

Anthony Fineberg from Joburg did his first sani2c Adventure in 2010 and did his tenth this year. He says that the route and the organisation gets better and better each year, and he keeps coming back because of the route and the vibe: “The singletrack and bridges this year were fantastic. The route just flowed.” 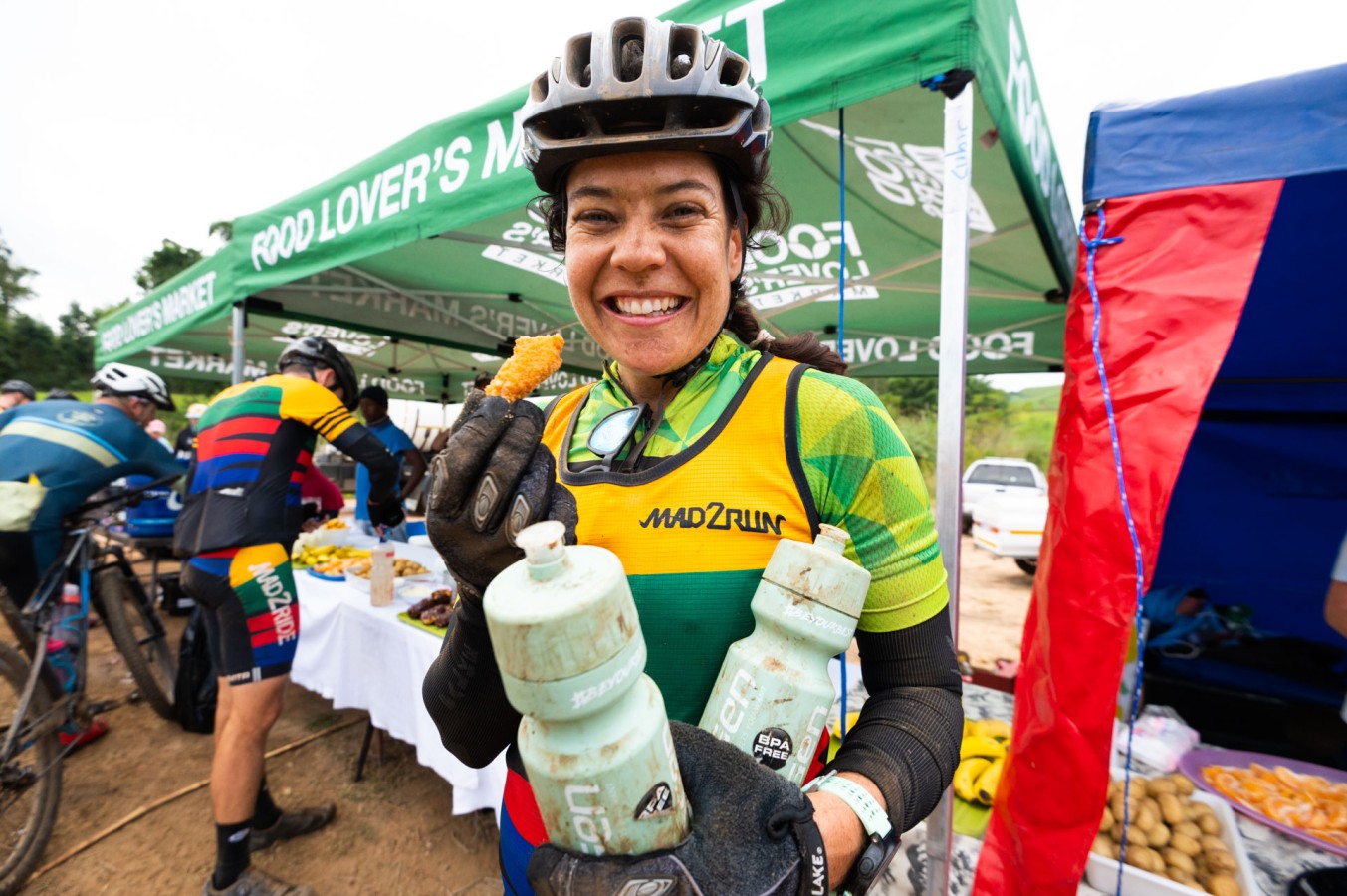 From the water tables to the race village catering, you won’t go hungry at the KAP sani2c!

Martin van Heerden from Joburg completed his tenth sani2c with his son Emile, and two daughters Maxine and Zahn, as part of a group of eight people who joined him this year. Since Martin did his first sani2c he has been introducing others to the event, last year inviting a friend to ride with him who did not even own a mountain bike at the time. He used Martin’s daughter’s bicycle to ride the race and then bought his own bike, and he rode the 2022 event alongside Martin and family.

“It’s an absolute adventure, and so well organised. Every year you think it just can’t get better but it just gets better and better. The routes get better. Farmer Glen has a way of pulling a rabbit out of a hat. Half of KZN gets flooded but you know that the sani2c will continue. It’s one of the most well organised races and that’s why you keep going back.”

In Vernon Crookes Nature Reserve, a section of the route on day 3, the sani2c team assisted in sorting out flood damage and they were able to fix sections of the route they don’t normally have access to work on. Martin says that it made a huge difference: “That section was 1000 times better than any time I have ridden it. I have fallen there three times previously but it was fantastic, I could ride the whole way.”

Martin and Alet have been married for 31 years. He says they are really going to test their marriage next year as the plan for 2023 sani2c is for Alet to do her first sani2c on the bike, rather than as a supporter.

The 2023 KAP sani2c will take place in late April, with the Adventure from 26-28 April and the Race will be from 27-29 April. Entries are now open. An important change in 2023 is that there will be no solo category. It was decided that for the safety of the riders it is best that everyone have a riding partner looking out for them.

The KAP sani2c nonstop takes place on 3-4 June 2022 and is a 250km race on much of the sani2c route, with a 24-hour cut-off time. Entries are still open for this team event with support vehicle.