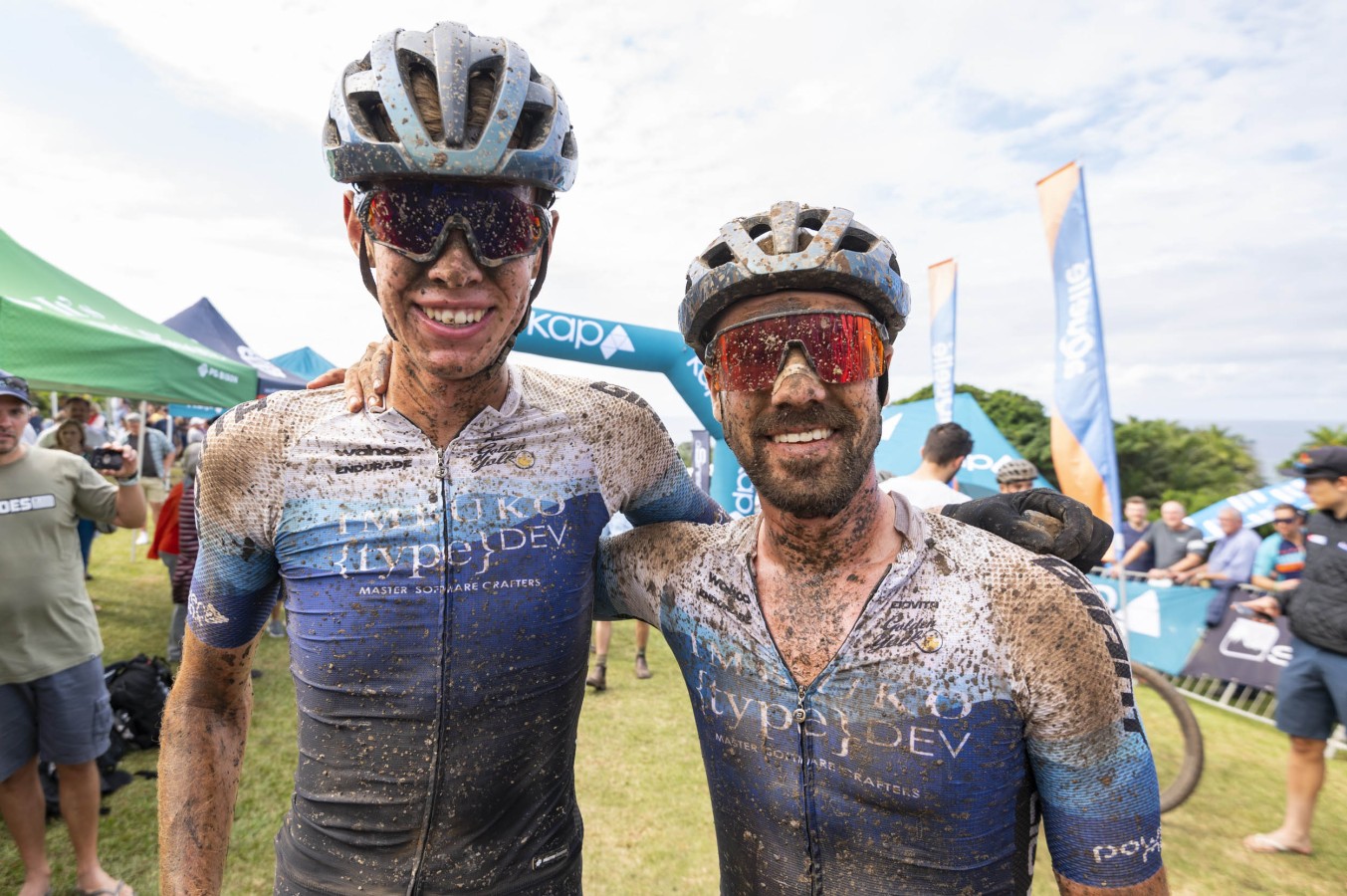 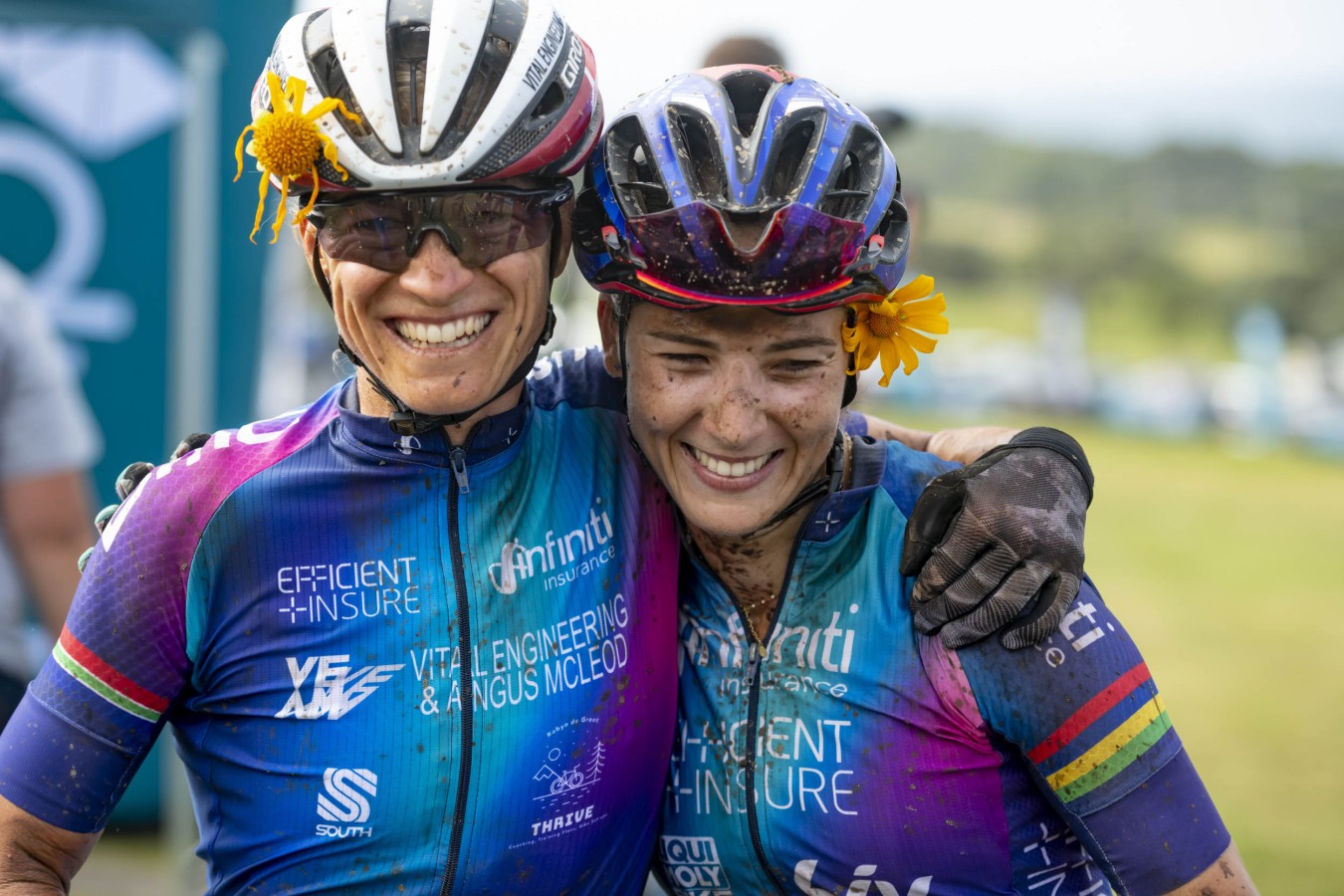 The third and final stage of the 18th edition of the KAP sani2c saw the same tight racing as the first two stages, with another sprint finish between the top three teams and solo rider Marc Pritzen of Honeycomb Pro Cycling. PYGA Euro Steel’s Phil Buys and Gert Heyns took the stage win (02:39:02) but with the three and a half minutes they had to make up to secure the title, they had to settle for a stage win and a 3rd position on General Classification (09:01:22).

Insect Science’s Arno du Toit and Keagan Bontekoning were second on the overall podium  (08:58:26), not having found the extra power today to break away and gain the 30 seconds it would have taken to win overall.

Pritzen rode his own race just back from the main group and surged at the end to cross the line one second ahead of team stage winners PYGA Euro Steel. Imbuko{type}DEV were a mere four seconds behind them (02:39:06). The Insect Science team lost steam for the final sprint and came in twelve seconds after Imbuko {type}DEV in a time of 02:39:18.

There was very little room for maneuver on this fast day of 84kms of racing from Jolivet Farm to Scottburgh Golf Club. With an attack attempted by Heyns at the 30km mark, Buys made his way to the front of the group to join his teammate, but the other two teams were not letting them go. All three teams jostled for position throughout the day, and the final sprint saw Marc Pritzen dicing with Gert Heyns for the line, followed closely by Phil Buys and the Imbuko {type}DEV riders. 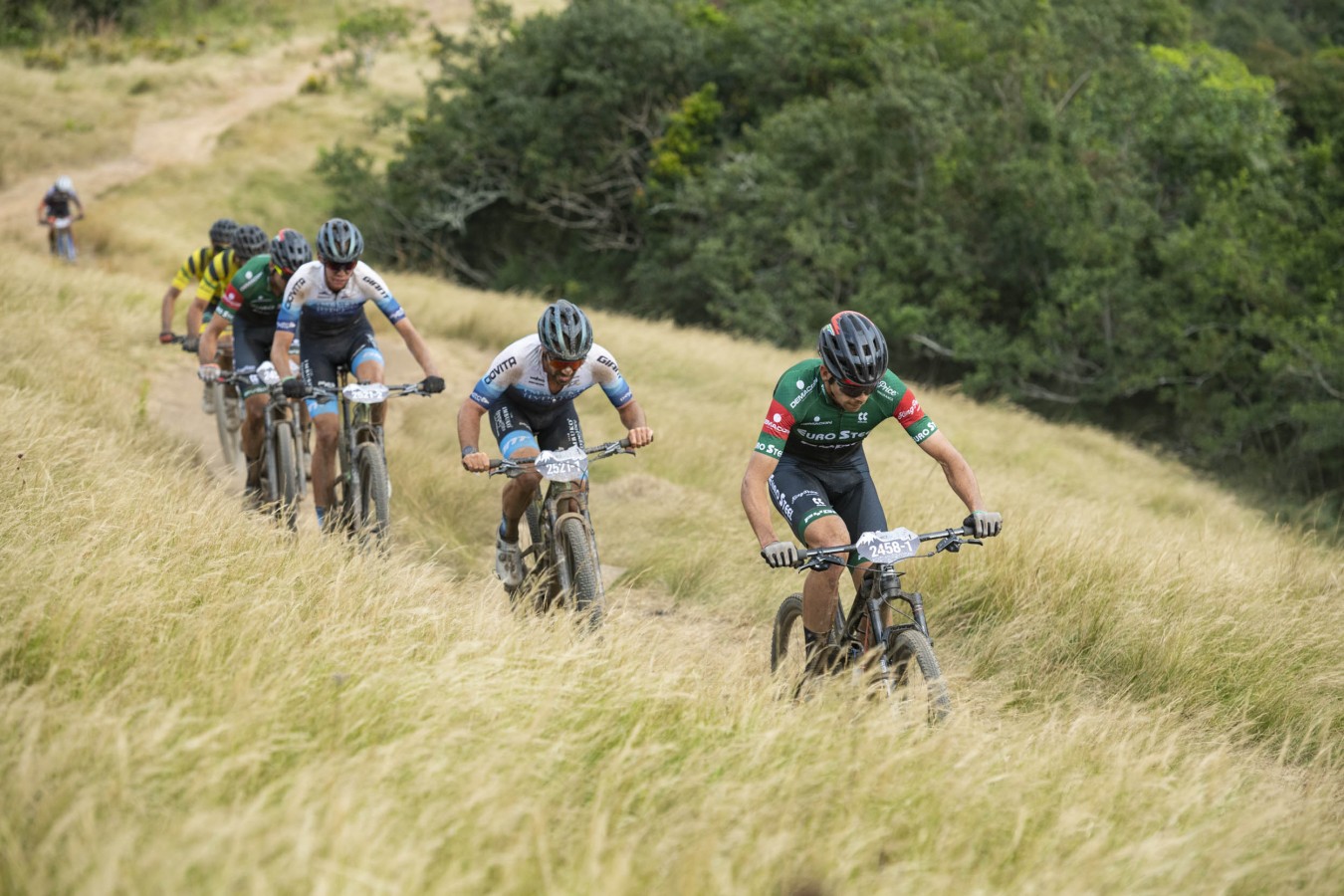 Joubert says the day went according to plan for them: "Day 3 at sani2c is super punchy so the pace is mega hard at points and then easy again. We had a 30-second buffer coming into today, so our tactic was just to sit and not give anyone a millimetre. I think PYGA tried everything they could, and they made it super hard at points, but we were glad to stick on their wheel and roll over the line to take the overall win.”

Botha says: "PYGA was super-aggressive the first half of the race, on all the climbs

they put the pressure on but they couldn't really split the field. We just had to ride safe. I was quite concerned about having a mechanical or something but luckily we made a clean run to the finish. There were a few tricky muddy sections towards the end and on that tall last climb we managed to distance Insect Science, and then it came down to a sprint finish with PYGA. Super happy about the race win and second on the stage."

The Insect Science team were happy with their result. Bontekoning says: “I think we've definitely made a step up as a team from last year and we are really happy. We definitely gave it our all, we left everything out there and that's all you can do. Today was very tactical and Phil made it really hard. Most of the day he controlled the race and we just followed. I think we both found that we didn't really have the greatest legs today so we couldn't try a move or do anything that we probably would have liked to. So we just hung on until the end and sat at the back of the bunch.” 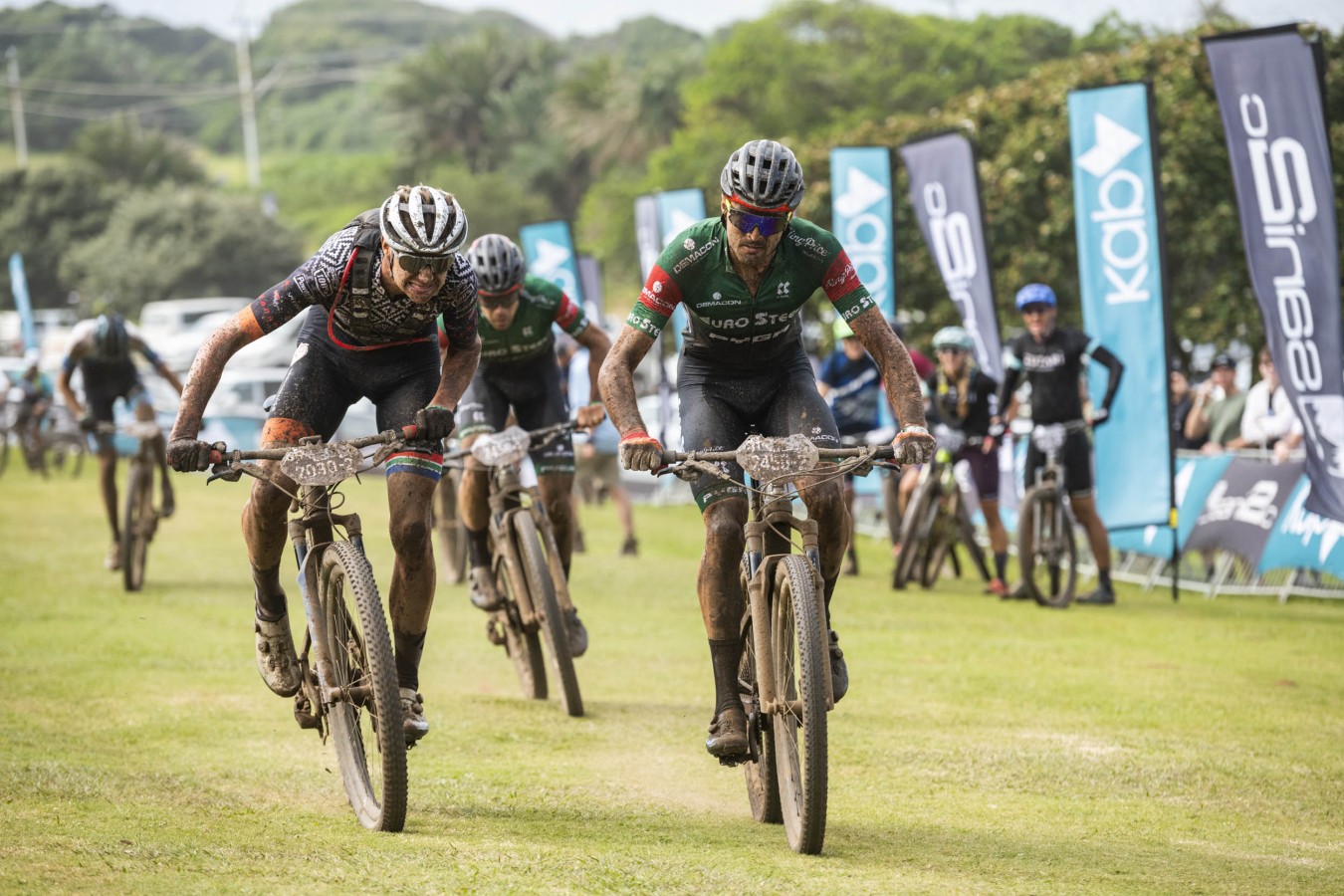 Du Toit says: “I think everyone knew that on this stage there’s only a handful of places where you can maybe get a gap and then try and hold it, but everywhere where I  thought we should try and do something, the other teams were already doing something. It was just flat-out racing and we didn't really have the horsepower to get that 30 seconds back. So well done to Imbuko, and to PYGA for taking the stage.”

Buys says: “At least we got the stage win, it was a good few days. The youngsters are quick and all three front teams are capable bike riders. I pushed it a bit on the one downhill but they all kept up under the pressure.’

Heyns agrees: “They had quite a gap on us yesterday so it’s very hard to pull it back today, and they managed to stick to our wheels all the way. There were a few small gaps but then we all came together again. We even tried on the downhills to get away or to force them to make some kind of mistake but they're all quite good. Luckily we knew that we had a good sprint so at least we could finish off on a stage win. It was still a great three days of racing.”

Buys says there are a lot of talented riders working their way up the ranks: “It's good to see a bunch of youngsters coming through - with our Academy for instance, the six youngsters that joined us on this trip, I think they gained quite a lot of experience and have done really well.”

Pritzen completed the three days of racing in a time of 09:03:46. This secured him the Solo Men Category win. He had initially entered the race as a team Honeycomb Pro Cycling with Travis Barrett, but Barrett had to withdraw due to illness.

He says: “I was very happy when I found out there was a Solo Category and that I would still ride with the front group. It’s great that I got to race against the top mountain bikers. sani2c is a really nice race and I am definitely keen to come back to and race it with a teammate, and see if I can win it.”

Robyn de Groot and Kim Le Court (Efficient Infiniti Insure) won the final stage in style,  in a time of 03:07:46. Teammates Sam Sanders and Theresa Ralph (03:14:12) were nearly six minutes behind them. De Groot and Le Court take the overall win with a time of 10:42:55, while Sanders and Ralph’s time in the General Classification was 11:28:24.

With their dominant performance of the first two days where the pair secured a significant overall lead, today was a day for De Groot to savour what is probably the last stage race of her racing career, and for Le Court to soak up the vast experience of De Groot to inform her incredibly promising stage racing career. 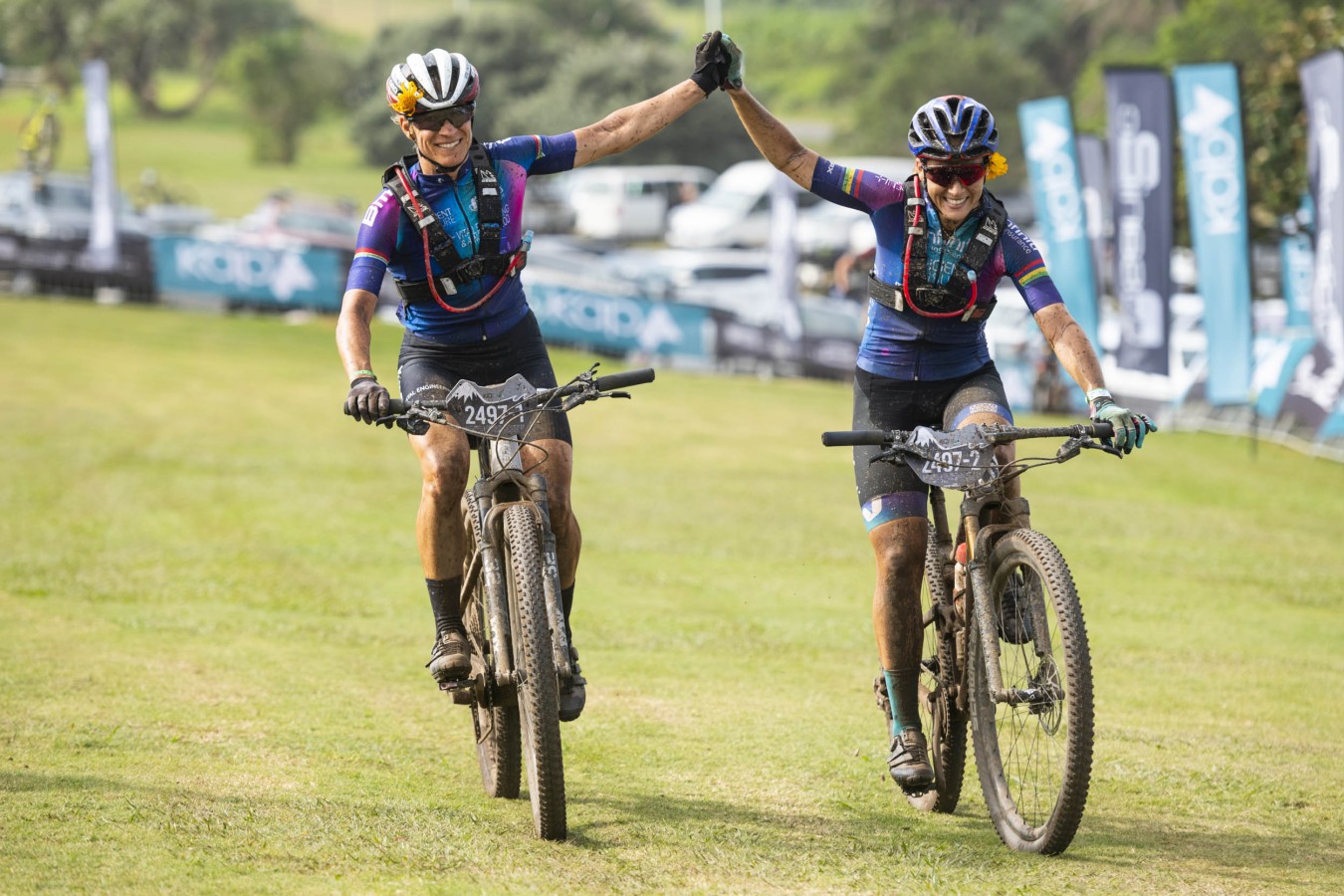 Le Court says:“It was my dream to ride with a partner like Robs, she has so much experience and I knew I was going to learn a lot from her. I was really looking forward to racing and racing to my full potential, and I'm really glad to win my first stage race ever, and hopefully not the last one.”

De Groot says: “The KAP sani2c is one of the ultimate classic stage racers in South Africa. Obviously, as a mountain biker it plays a massive role in your career as a professional athlete. They've always been fantastic to the pros. What a way to finish my career, to win with a youngster, really special.”

After a tough first stage where Sanders had mechanical issues and fell off the floating bridge, Ralph and Sanders had a good solid day on the bike and stuck with De Groot and Le Court for the first 30kms. By ‘Work to be done’ Climb at 39kms there was a 30-second gap between the teams, and this extended during the remainder of the race. 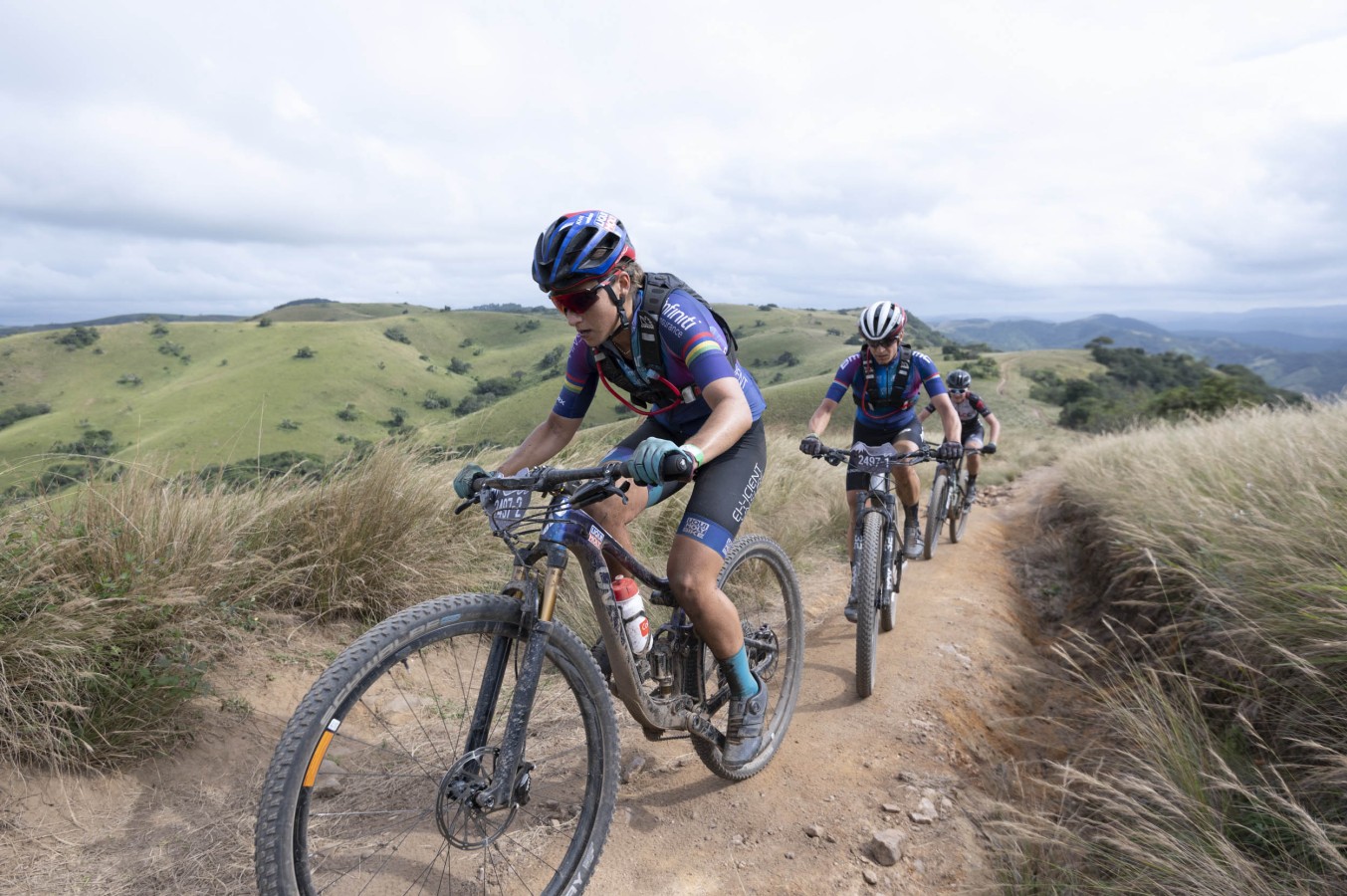 Ralph says: “Sammy kept an amazing pace that kept us strong all the way, even on the last 10kms of every day she opened it up and we finished strong. That is a good sign of form and fitness ahead of SA Champs in two weeks. We had so much fun out there, the trails were incredible.”

Sanders says: “sani2c was amazing. I think I have done this race six times and every time I come back it’s as fun as it was the first time.”

Third for the stage in the women’s race were Jone van Eeden and Karlise Scheepers of team SkyNet Kleinplaas Pype (03:29:41). They were third overall with a GC time of 12:25:29, and they take the win in the Young Guns Women Category (under23).

Entries for the KAP sani2c 2023 will open on Thursday 19 May. The KAP sani2c nonstop event takes place on 4 June 2022, and entries are still available. Enter online: www.sani2c.co.za