The KAP sani2c’s 18th edition got off to a blistering start as the top three teams stuck together and shared a sprint finish, with solo rider Marc Pritzen pushing ahead to finish in first position for the stage in a time of 02:54:40, as Insect Science’s Arno du Toit and Keagan Bontekoning took the first team position (02:55:07). Marco Joubert from Imbuko{type}DEV crossed the line ahead of the pair, but Joubert’s partner Wessel Botha was behind them and Gert Heyns from PYGA Euro Steel. Heyns’s partner Phil Buys was just behind Botha, giving PYGA Euro Steel a third place for the stage (02:55:08).

The Race started from Glencairn Farm near Underberg this morning and saw 1000 riders traverse 82kms of district roads and extensive singletrack to finish at Mackenzie Country Club near Ixopo.

The top three men’s teams and Honeycomb Pro Cycling rider Pritzen were together for what each team described as highly tactical racing throughout the day, no one team managing to break away at any point until the finish. About 500m from the finish Bontekoning made the break and ensured the win for him and Du Toit, despite a very strong sprint from Joubert. 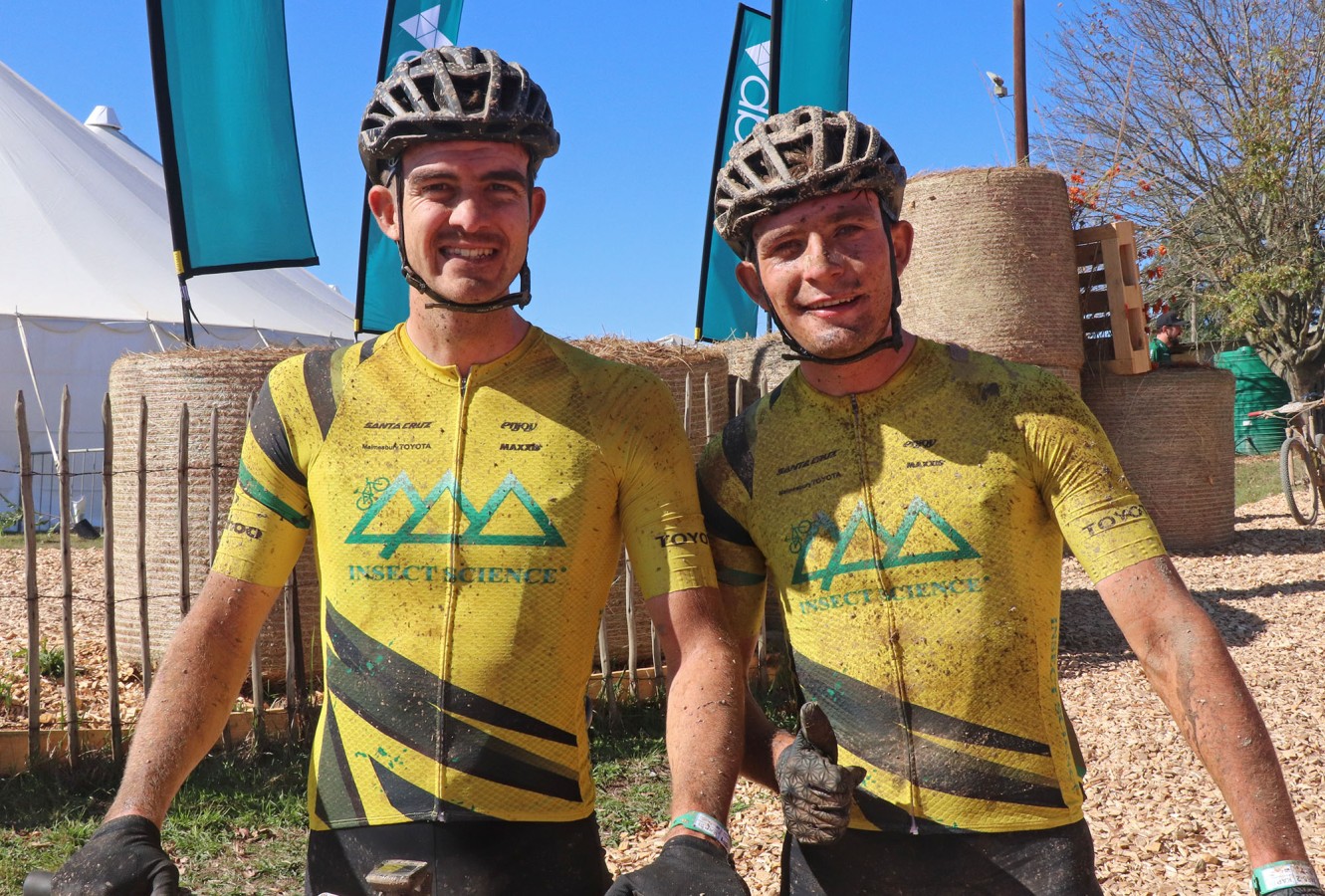 Du Toit says: “On that first gravel road it was fairly chilled today, I think nice and controlled. A nice new piece of single track almost caught us off guard and mixed the racing up a bit early on, but we all got back together. And then over the first real climb we actually missed the front. We had Marc Pritzen as a solo rider disrupting it a bit but we just kept our heads down and got back to them just before the first waterpoint, and it was all together then. From then it was pretty much a tactical thing. We knew we just had to save energy and pace ourselves and in the end I think Keegan read the race quite nicely. He made a move nice and early and I just sat there and made sure I was the first second rider across the line.

Bontekoning: “We saw at the start that we were quite a strong match compared to the other teams. I think PYGA Euro Steel went off at the first attack and they felt they couldn't hold the pace, so that kind of sat it up a little bit. We managed to ride back on and then it went very tactical, and we just saved ourselves and stayed out of the wind as much as we can. This year it wasn't so fast coming into the finish so I decided to do an early move and leave it up to Arno to bring it home.”

Marco Joubert: “That was a super tactical race. I think everyone gave their two cents to try and get away but it just wasn't meant to be I guess. Then the last 500 meters  this sprint opened up and once you start sprinting you can't stop. There is no time gap so it will be hard, I think the race will be decided tomorrow.”

Botha says: “It’s always a bit tactical racing sani2c, and super fast with no real big climbs on day 1. A few guys shot some moves, but nothing really stuck. It was a tactical finish, coming down to the sprint, we're looking forward to the next day. I think tomorrow's day is definitely where the race gets won or lost - we will have to put the pressure on and try and split for us.”

Buys says: “I think early in the race we started getting a small gap, but when the group came together we sort of took it easy until that last water point (at 66km) -  that’s usually when the fireworks start. It was close racing. The first day is always close. So I think tomorrow is a big day,  I didn't want to overexert today, those last ten, fifteen minutes hurt, so it’s now about getting some good recovery in and then we'll go again tomorrow.” 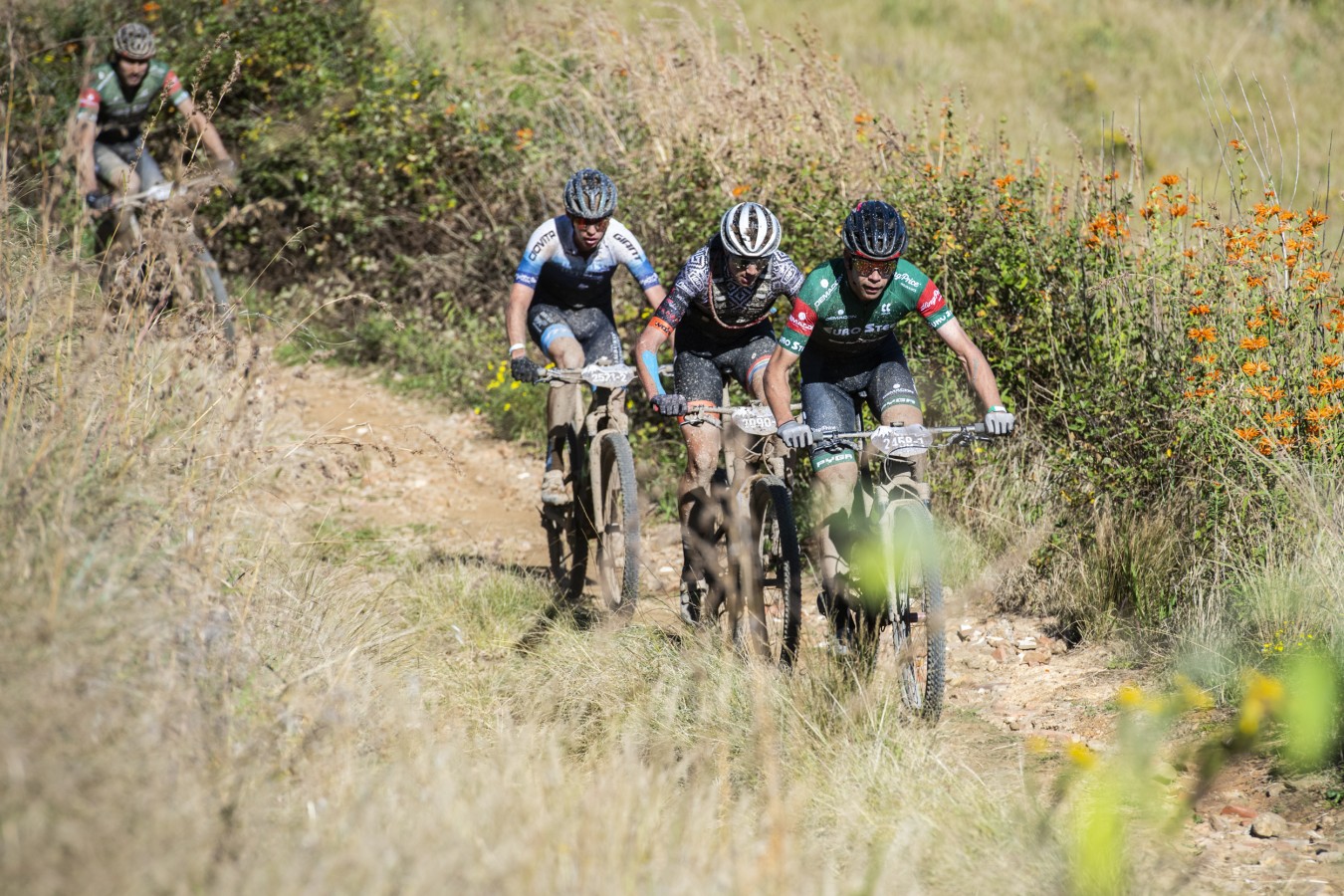 Phil Buys, followed by Marc Pritzen and Wessel Botha, with Gert Heyns not far behind, taking on Bowman’s Hill during the last stretches of day 1. 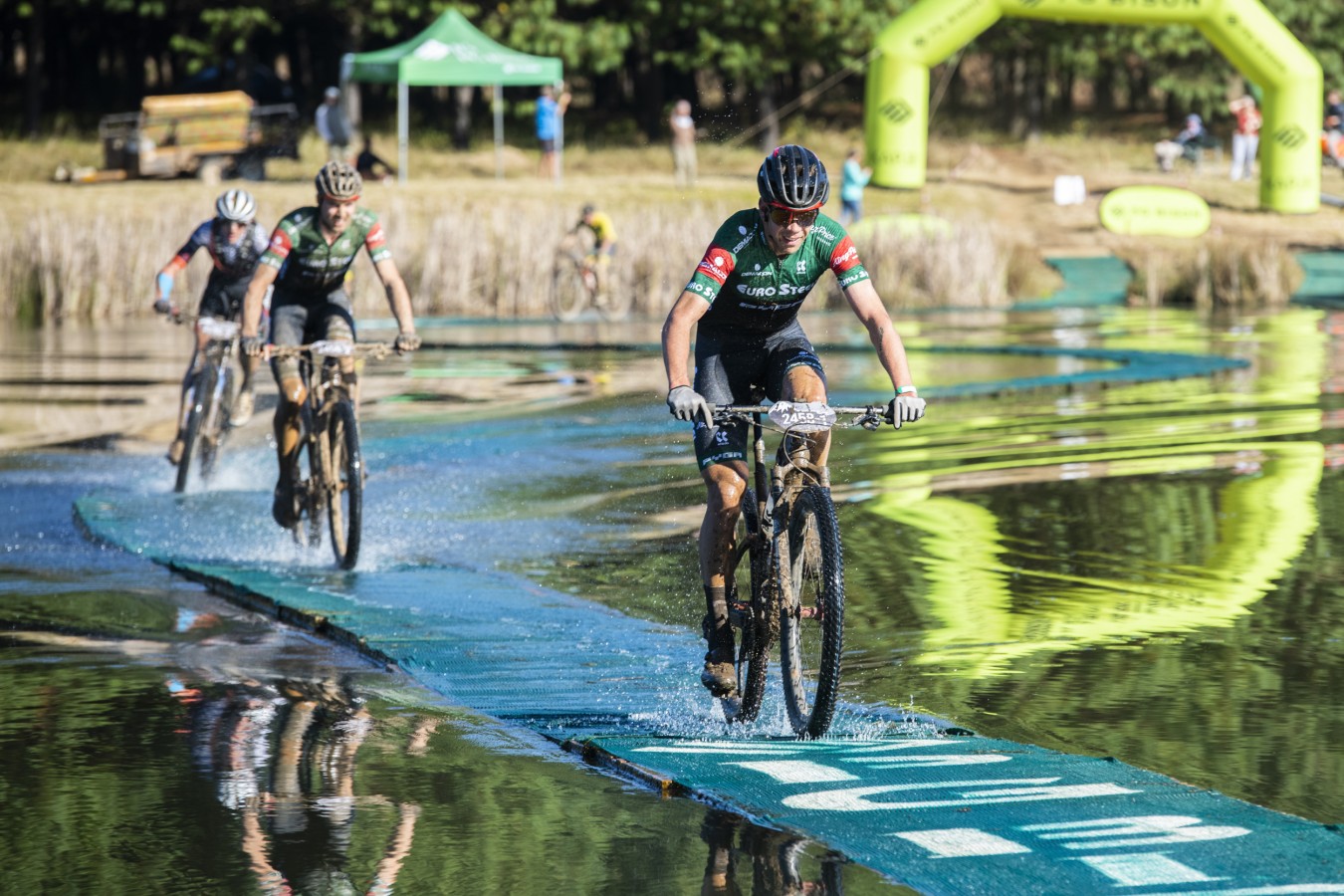 Phil Buys leads the race crossing PG Bison Floating bridges near Pevensey during the early stages of the race. Behind him is teammate Gert Heyns with solo rider Marc Pritzen in close range.

Heyns says: “I think we’re both still feeling quite good. I think everyone will still have something for tomorrow. Tomorrow's a big day and I'm sure it'll split up tomorrow.”

The two Efficient Infiniti Insure teams had very different days on the bike with Sam Sanders experiencing technical issues with her bike early on and then slipping on the PG Bison bridge and falling into the water. Robyn de Groot and Kim Le Court were clearly the dominant team though and came across the line at Mackenzie in 3 hours, 28 minutes and 43 seconds, nearly 19 minutes ahead of their teammates.

Le Court says: “I thoroughly enjoyed it. Robyn was super supportive along the route, always asking if I'm feeling okay. I was the one who was in the hurt box, but I love being in the hurt box.” 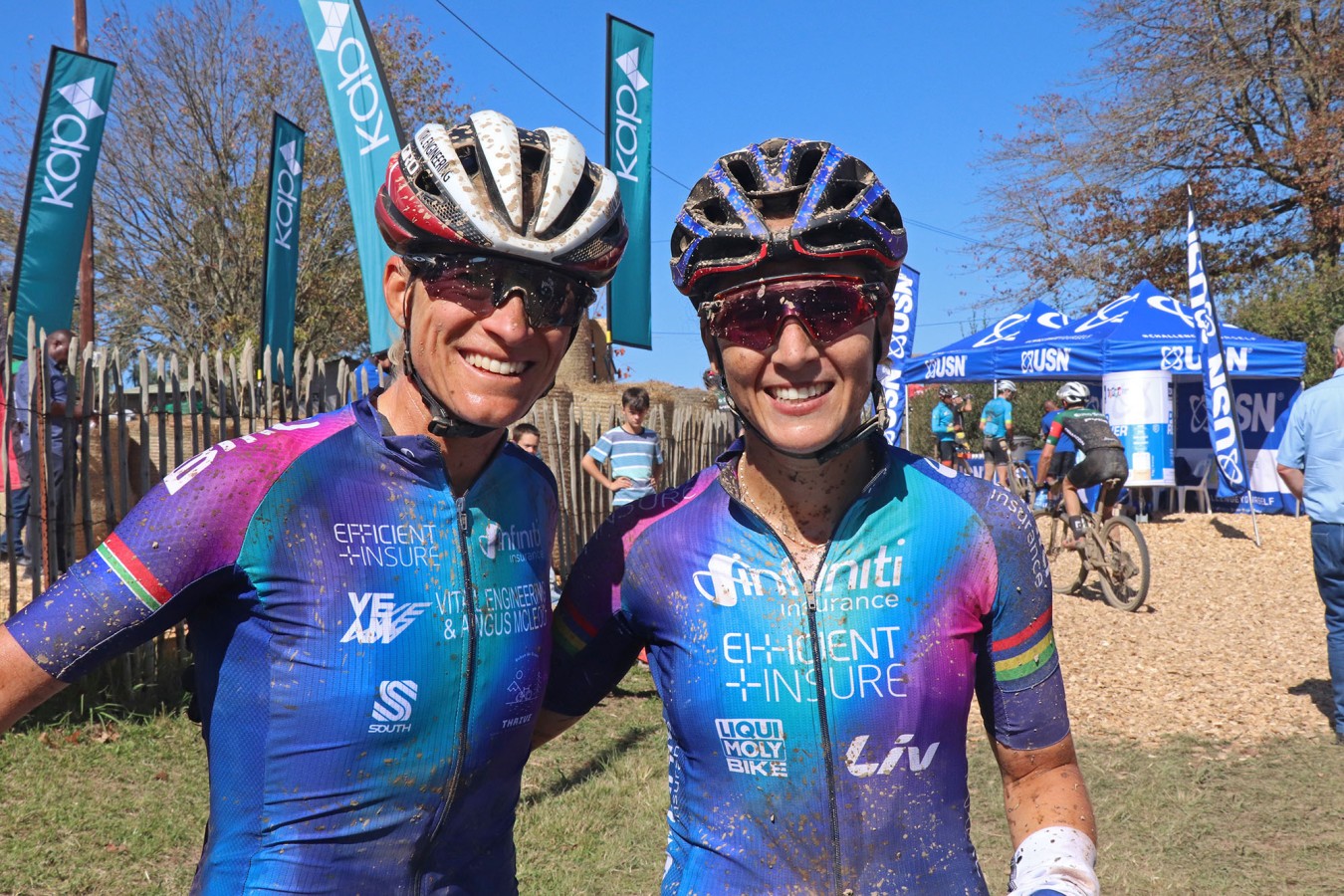 Asked about De Groot’s mentorship role, Le Court says: “Robyn and I chatted a lot before the race and she gave me a lot of tips, making me consider situations I had not thought about. It opened my eyes for the next few days and the next few stage races coming in the future. I’m looking forward to the next couple of days.”

Asked if this will be her last KAP sani2c, De Groot says: “I'll probably do sanis in the future but not in the racing category. I'm definitely in a bit of a transition phase in my career.”

She says she may race with Kim again later in the year depending on how things work out and if she can keep her fitness up. 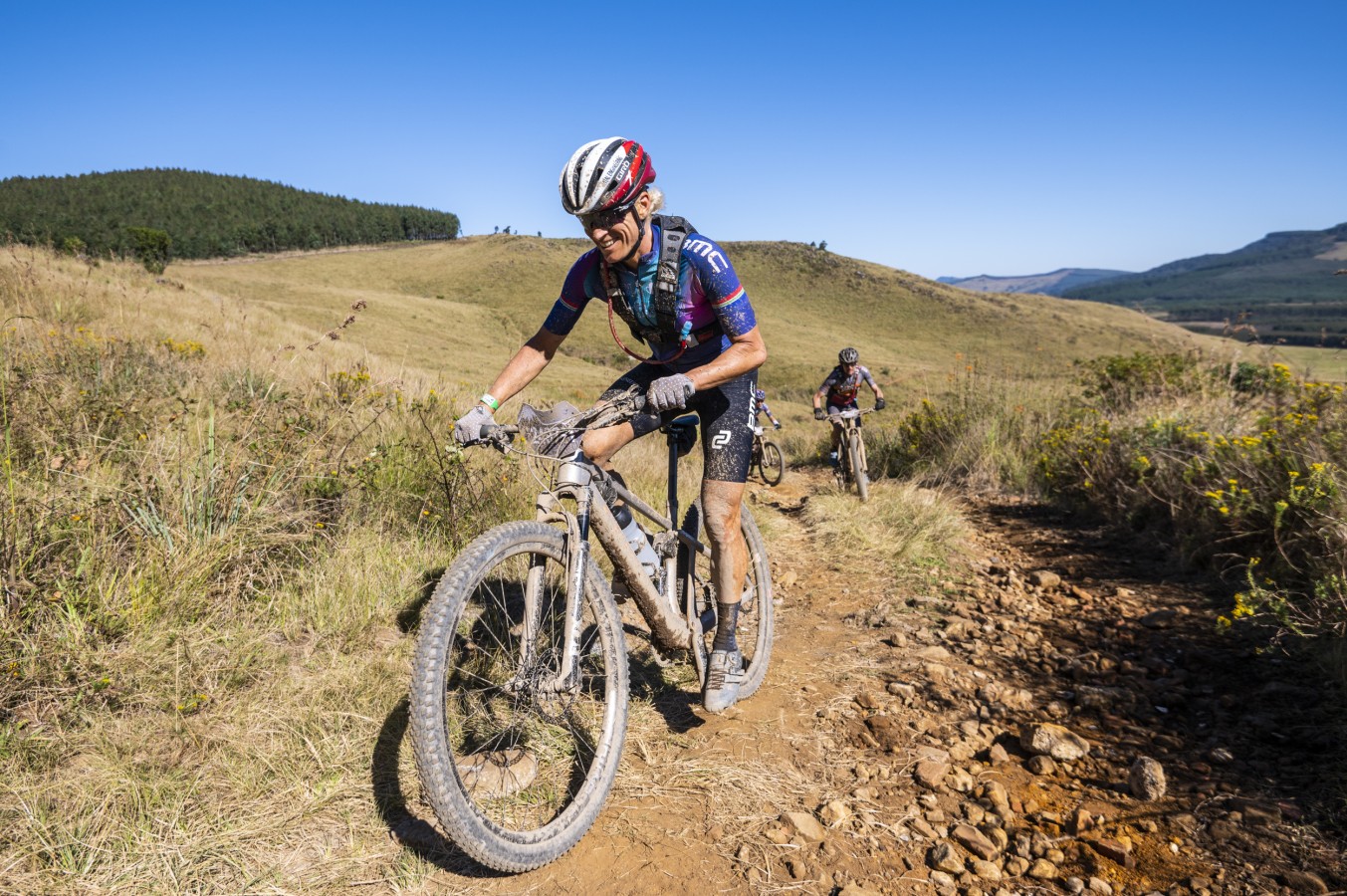 Robyn de Groot is all smiles on Bowman’s Hill with teammate Kim Le Court not far behind.

“I thoroughly enjoyed the trails, it's just such fun riding - not a lot of time on gravel road and trails in really good condition this year.  I've actually struggled to train for this but then when you hit the singletrack you find your passion on the trails.”

After a disappointing day, Sanders was still in good spirits: “I had a bit of a mechanical with my gears when shifting so I didn't have all my gears, and I managed to fall off the bridge and go swimming but you know, we just laughed it off and finished the stage with a smile, and tomorrow's another day. Anything can happen to anyone; we’ll give it another go tomorrow.”

Ralph says they will check batteries and check alignment and maybe reset the auto gears and hopefully we will be powered tomorrow.

“And then you never know what can happen,” she says.

In third place in the women and the first Young Guns Women across the line, were Jone van Eeden and Karlise Scheepers of Team SkyNet Kleinplaas Pype (03:59:35).

The race is being broadcast live on the KAP sani2c Instagram: _sani2c