Can the young challengers overthrow the titans of KAP sani2c?

The KAP sani2c’s 18th edition looks set to provide exciting racing amongst the men, as a batch of maturing younger riders with a few years’ experience are ready to take on the more established Elites. The Race starts on Thursday 12th May from Glencairn Farm near Underberg, with the 1000 Adventure riders setting off the day before.

The experienced, familiar faces of Phil Buys, Gert Heyns and Arno du Toit will line up amongst a strong set of teams. Missing the race this year is Matthys Beukes, who recently retired from competitive riding, a legend of the sani2c who just in the past five years podiumed every year, with three of them wins. Heyns, Buys and du Toit have shared those podiums with him, at times as teammates and at others as rivals.

Buys and Heyns will form the one Elite team representing PYGA Euro Steel this year, and Buys looks forward to chasing another win: “I am excited to get back to sani this year to try and defend the title for our team. Last year we managed to take 1st and second on GC and although we only have one pro team racing this year, we do have a few youngsters racing for us on Academy level. We will have two additional teams and two riders in the solo category, so we are quite the crowd with support crew. The event ensures great publicity for the sport and our team so it's a high priority race for us to do well in.” 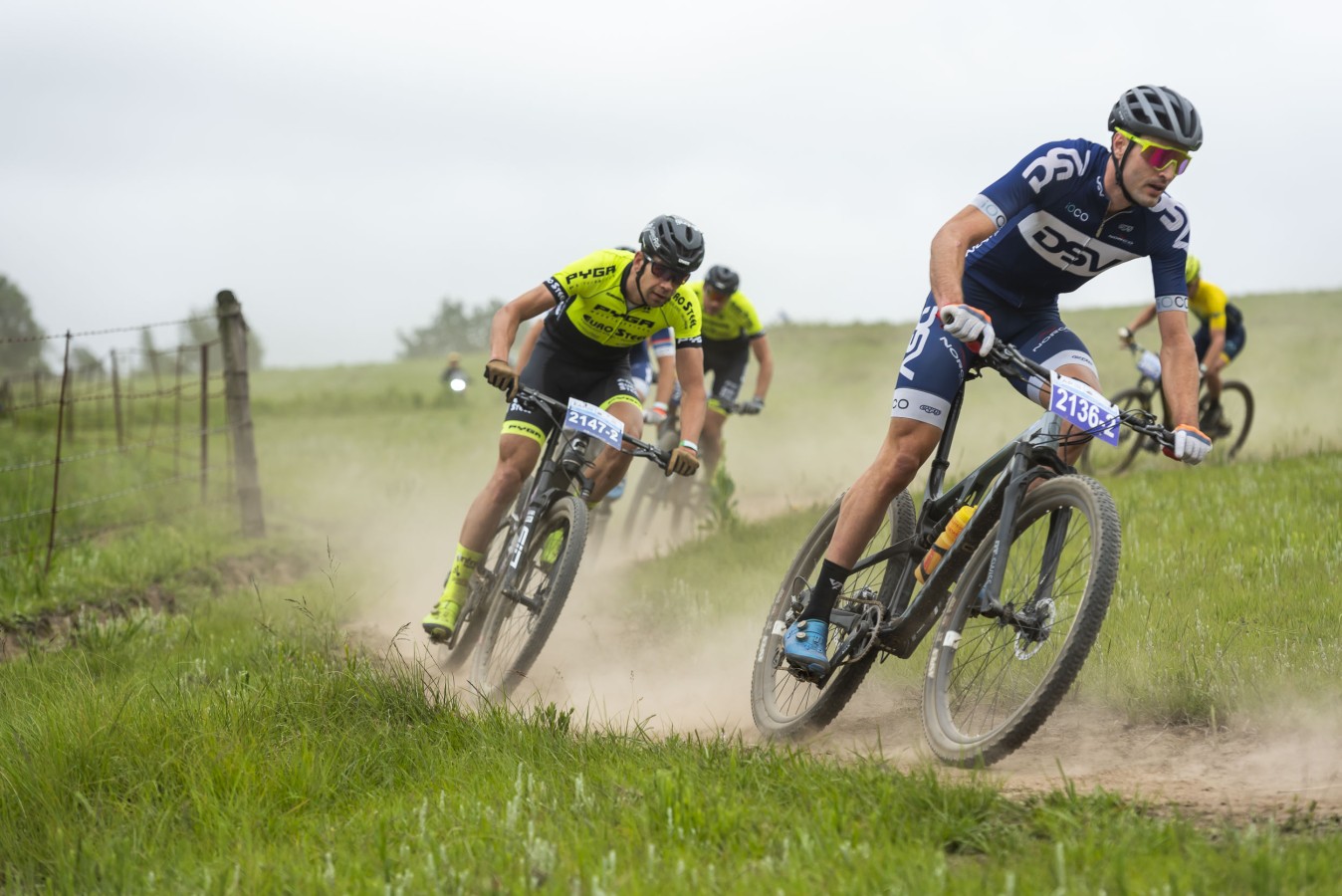 Buys and Heyns were not at the Absa Cape Epic earlier this year. Heyns has had a slow start to 2022 racing after being ill at the start of the year, but has been slowly building up form. After taking a win at this past weekend’s Western Cape XCO, Heyns is feeling confident that he is race-ready. Buys has had some good results at XCO races this year, last month placing second at African Champs in Namibia and then winning at SA National XCO Race #3 on 30 April.

Riding in the solo category as a new  PYGA Euro Steel team member is Pressmore Musundi. 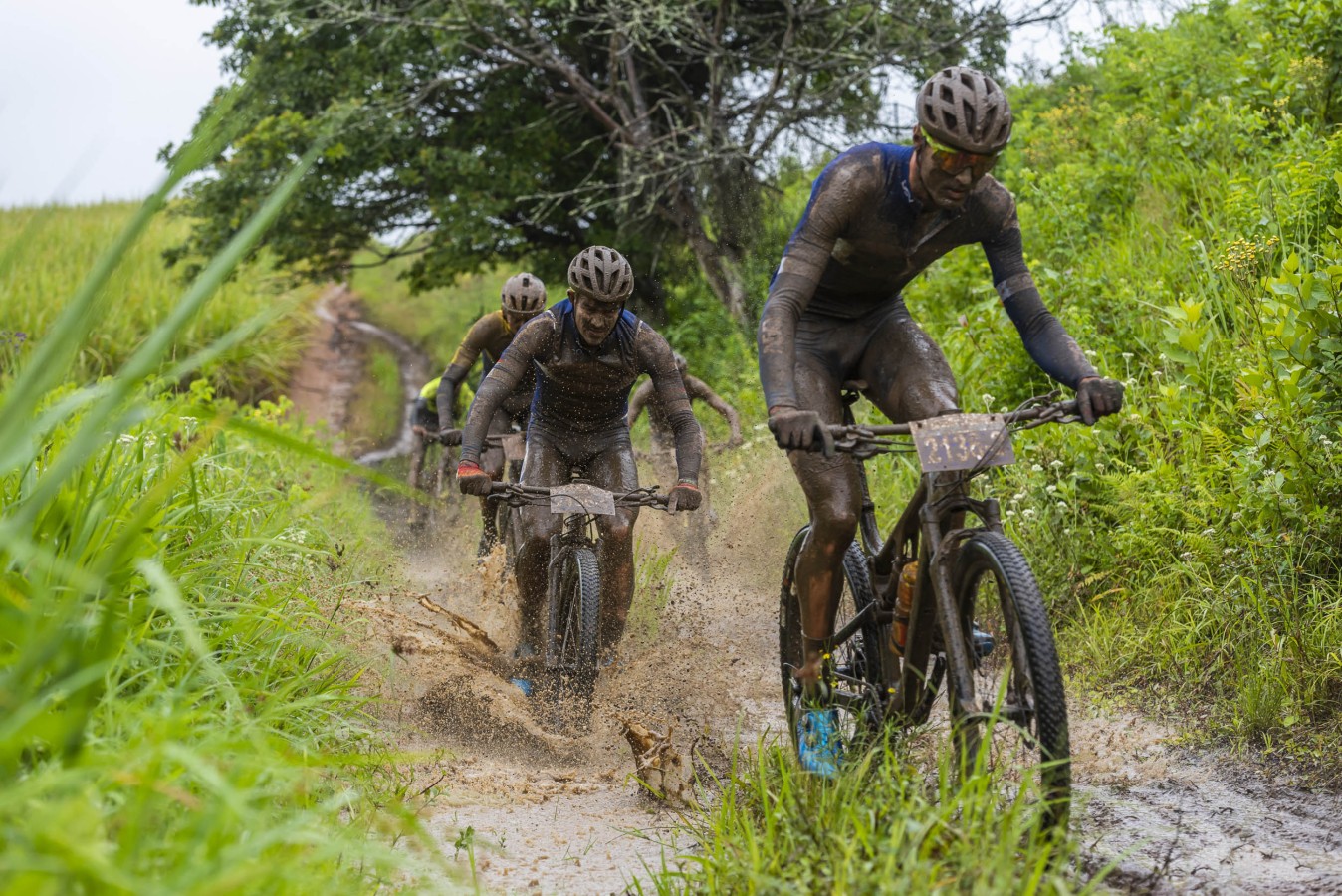 Bontekoning says: “This year I'm excited to be teaming up with Arno. We’re quite positive going into this year’s sani, but we know that there are some really good teams on the start line, with Imbuko {type}DEV probably being one of the main contenders, and PYGA Euro Steel. This will be my fifth sani2c and I now know the ropes and what to expect, and how the racing should plan out. Both Arno and I have had really good starts to the year, coming off a really positive Cape Epic.”

Bontekoning and du Toit took second place in the Absa African Men’s Jersey at the Cape Epic and were 12th overall.

Gunther Katzke and Herman Fourie were set to make up the second Insect Science team, but a recent crash and subsequent surgery has taken Gunther out of contention. Veteran racer Alan Gordon is stepping up and will be in a strong position to mentor Fourie in his transition to the Elite ranks. As an ‘Epic Legend’, Gordon is an extremely experienced stage race rider.

Marais will be riding with Franko van Zyl.

Says Marais: “Franko has progressed in leaps and bounds in the time that he has been racing. Going from a 95 kg rugby player to a pro cyclist is in itself a massive feat, but throw in the fact that he managed a top 3 in the African jersey and a top 20 at his first Epic - we are looking forward to seeing what we can achieve.”

Van Zyl will be leaning on Marais’ experience of twenty years involved in the sport - he stood on the sani2c podium in 2019 with Matt Beers. Marais says of his form: "I have had a bit of a slow start to the season after Covid-19 and a few other illnesses, but I am starting to feel like my old self again on the bike and am looking forward to pairing up with Franko. sani2c is one of those races that I have always had on the calendar as it traverses areas I grew up riding in when I lived in Ixopo as a kid, so I cannot wait for the race to start.”

HB Kruger and Matthew Keyser will be racing as Team Valley Electrical Titan Racing. Kruger says the pair are going into the race strong despite a tough Epic where Keyser became ill and had to withdraw.

“We’ve have had a good season so far, Matt and myself have had success in winning the PE PLETT this year overall as a team. I finished 3rd at the Cape Town Cycle Tour, and Matt has podiumed at some local road races. Unfortunately at Epic Matt got ill and I finished solo. It was a good experience but not the same racing without a partner.

“We have gelled well at the stage races we have done, and with sani2c being a goal race I think we are both at the level of being able to achieve a good result. We are looking forward to racing with our strengths - sani2c is always fast and competitive so it will not be easy but we are up for the challenge.

“I’ve had some ups and downs at sani2c. In 2016, myself and Johann Rabie were leading until the last day, but we suffered from a mechanical and finished 3rd overall. In 2017 I rode with Waylon Woolcock, and we had a similar experience, day 2 was neutralized and on the last day we were well on our way to winning the stage and overall, but again after a mechanical we finished 3rd. That elusive top step is hopefully where we can end up at this year’s edition.”

A team to watch may well be the pairing of Marc Pritzen and Travis Barret. The road cyclists, both previous Cape Town Cycle Tour winners, are not experienced as teammates on mountain bike stage races. Pritzen did finish Cape Epic this year, but unfortunately had a partner who had to pull out.

Robyn de Groot has taken the title at sani2c six times since she first took part in 2013, one of the wins with Samantha Sanders in 2019, and has a lot of experience to share with the young Le Court, who won the Cape Town Cycle Tour earlier this year. 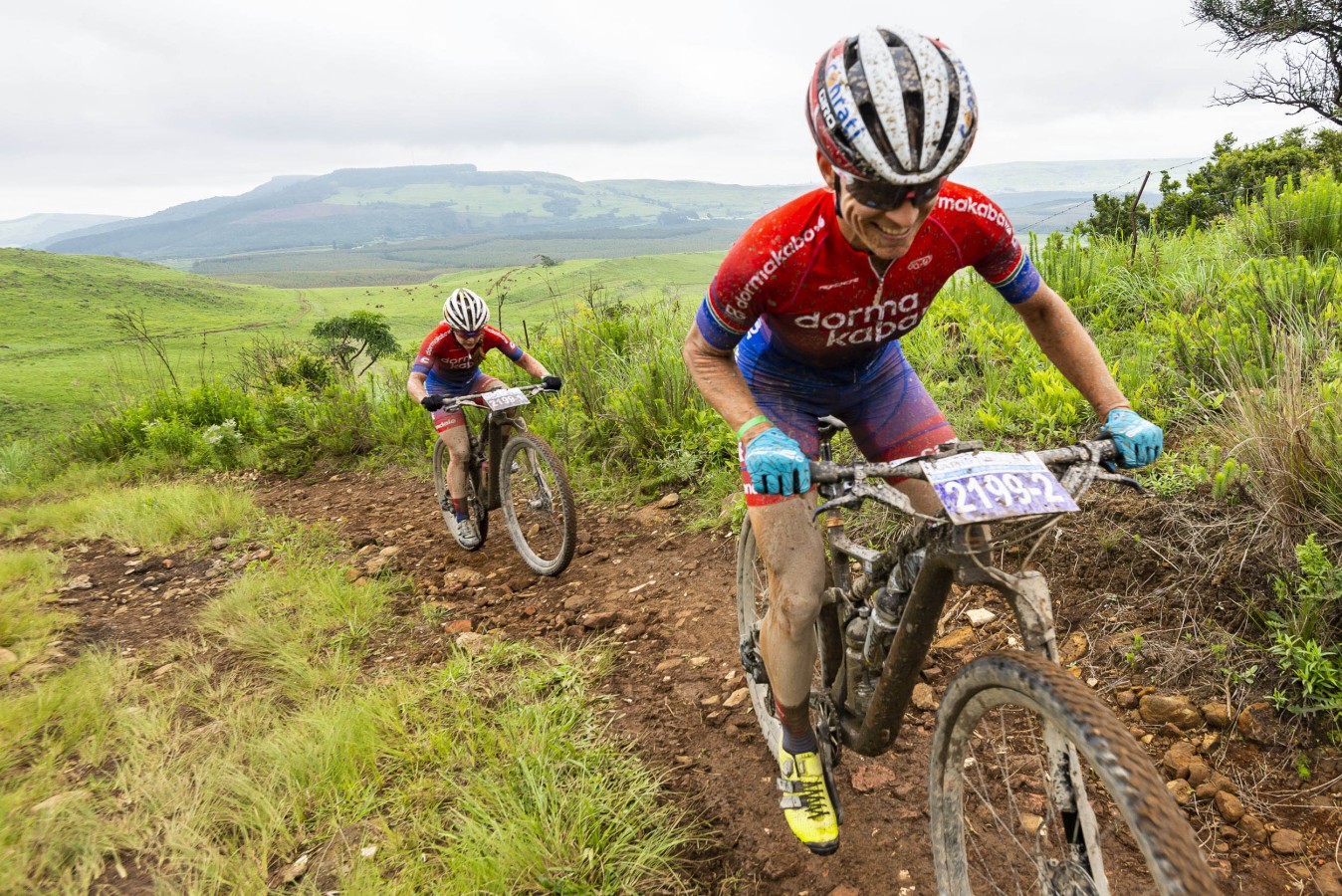 “I look forward to taking on the race with Kim, we are lacking younger riders and it would be great to pass on some knowledge and race with a youngster. sani2c is always a wonderful event on the calendar - it’s one of the classics that still takes place after all the years. What makes it particularly important isn’t only an amazingly fun route, but more so in how the race includes the community, uplifts and what it means to those people.”

De Groot says she is in a transition stage in her career: “The pandemic has had a huge impact on sponsorships, and without backing into 2022 I’ve adjusted my focus on building my future beyond my own performance. It’s opened up time and space for my coaching/training business. Cape Epic presented itself as a surprise, one that offered closure for me on an international stage. The support and backing I have received from Efficient Insure and Infinity Insurance, and Vital engineering through this transition phase has been paramount and I hope to share my experience and knowledge with the team and become more involved at events from a different perspective.”

Sanders and Ralph are a formidable pairing, and the two have only good things to say about riding together. Sanders says: We have paired up in the past for sani but this year will be different:  Firstly, we are now teammates on Efficient Infiniti Insure and secondly I believe that Theresa has evolved as a rider in the past while. Her skills and speed through technical sections has notably improved and she rides really well to her strengths. I haven’t raced since winning PE PLETT in February, choosing to focus on quality training so I know the race might be a shock to the system. I also know I am in good hands with Ralphi as my partner.” 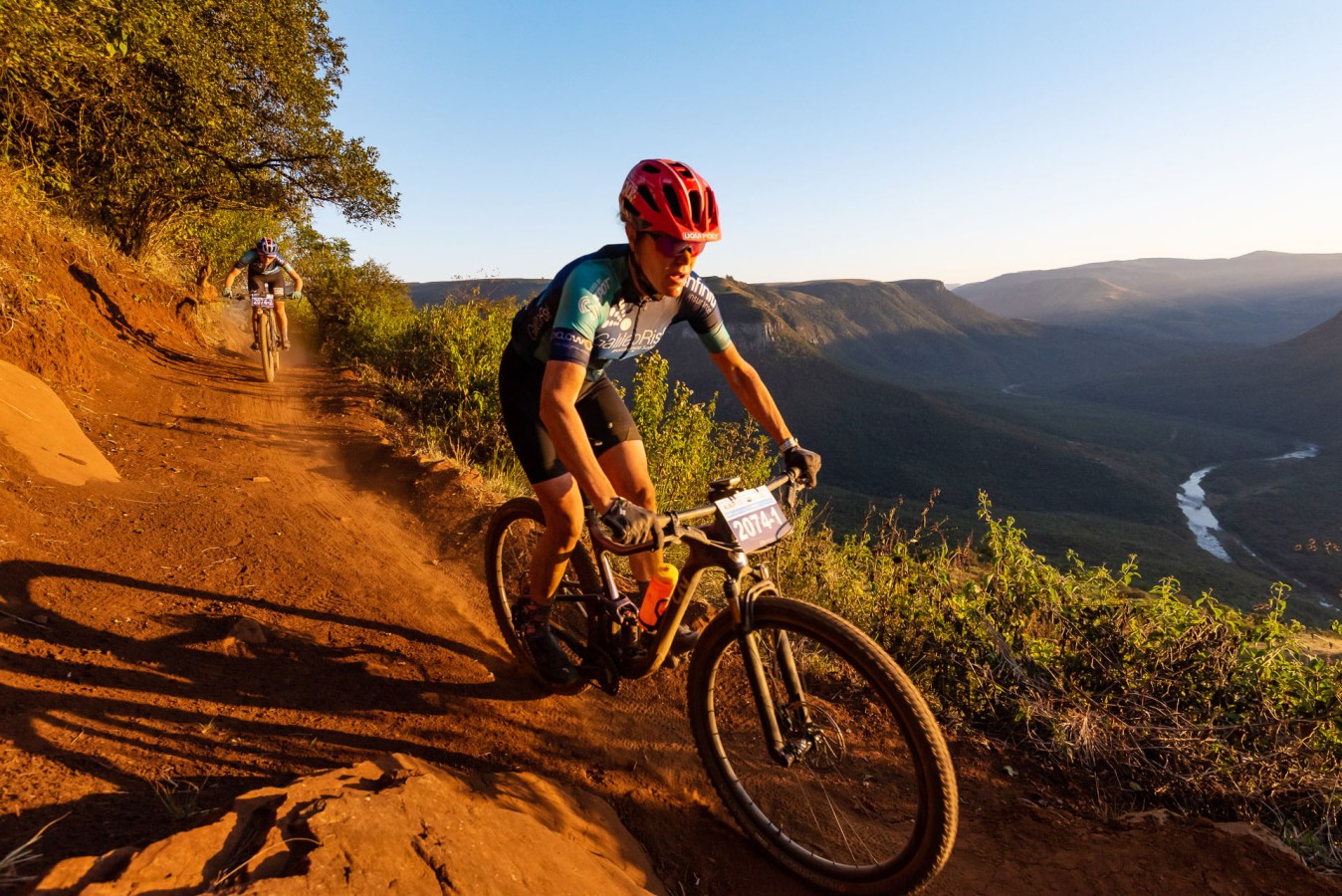 Ralph, who just two weeks ago won the mixed category at Joberg2c, says: “Apparently, we are the only two pro teams at sani2c this year so it will be nice to get a bit racy between ourselves to keep the competitive element going. I am hoping we can be competitive with Robyn and Kim, they are both really strong and will be a tough team to beat. I raced Epic with Kim last year and she was clearly the stronger rider. They are going to be fast.”

Sanders last did sani2c in 2018, where she and de Groot won: “Naturally, can’t wait to be returning to race sani2c. It is one of those races that no matter how many times you’ve ridden it, you go there filled with excitement and enjoy every kilometre of riding. For me, knowing the route like the back of my hand brings a different kind of eagerness because you always remember mistakes made and moments where you reckon you could be faster.”

“The weather forecast is looking good for a dry three days of riding,” says ‘Farmer’ Glen. “The trails are in great condition after much work to repair flood damage and we are excited to host some of the top riders in South Africa.”

The race will be broadcast live on the KAP sani2c Instagram: _sani2c