Beukes and Heyns extend their lead at KAP sani2c Stage 2

Riders left Mackenzie Club near Ixopo at 6.30am to ride down the famous “Umko Drop”, a descent into the Umkomaas Valley, followed by the “Iconic Climb”, an ascent that can be the deciding factor of the race. Stage 2 is a 97km route ascending 1185m, with a total descent of 1855m, and it finishes at Jolivet Farm near Umzinto. The race finishes at Scottburgh tomorrow. 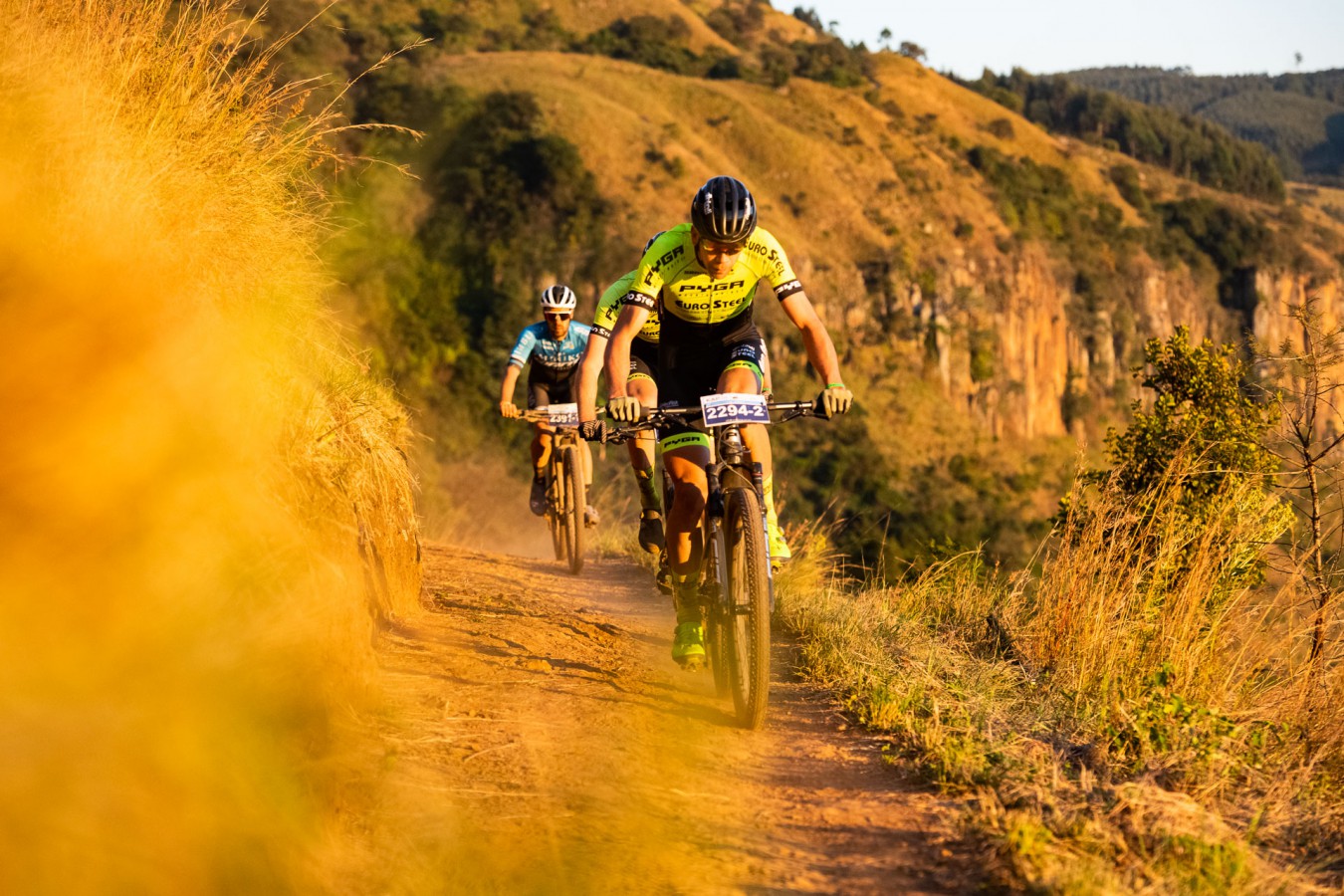 Beukes says: “It went very well for us. Our gameplan was to hit the Valley Climb really hard and we did that and managed to get a gap quite early on. We then just had to maintain and steadily build on our gap. It was a solid day for us.

Heyns says: “Matthys was very strong and did the pacing and luckily we now have a good gap ahead of tomorrow.”

Beukes says about the plan for tomorrow: “We have some time to play with now but anything can still happen so we have to be on it. In most cases the best defence is offence so we may as well send it again for Sunday.”

Slipping from third into fourth for the day, Beers says: “Wessel had a crash around 35kms after the first water point and hurt his hip quite badly, and his bike was a bit banged up. We had to chase back and rejoin and Wessel was struggling to pedal at full power. We just had to try and make sure Rudi and Marco didn’t get too far ahead. We still have a few minutes ahead of them going into tomorrow so hoping to go for the podium spot.” The pair maintain their third place in the general classification.

Joubert and Koen were happy with the day’s performance: “Rudi had a bad day yesterday, so today was all about managing the effort and seeing how hard we can go, and I think we paced ourselves pretty well. Towards the end, we could have possibly tried for second, but tomorrow is a long hard day so we hope to reap the reward of saving a bit at the end.”

Koen says: “I felt much better than yesterday, and I really enjoyed the trails and views we had today. Ready for tomorrow.”

Insect Science Pro Cycling’s Arno du Toit and Keagan Bontekoning, who were fourth yesterday and had hoped to gain on the lead group today to secure a stage win, had their hopes dashed by technical issues and finished in 04:15:49 (GC 07:09:36).

Another strong day for Motorlease Perigon 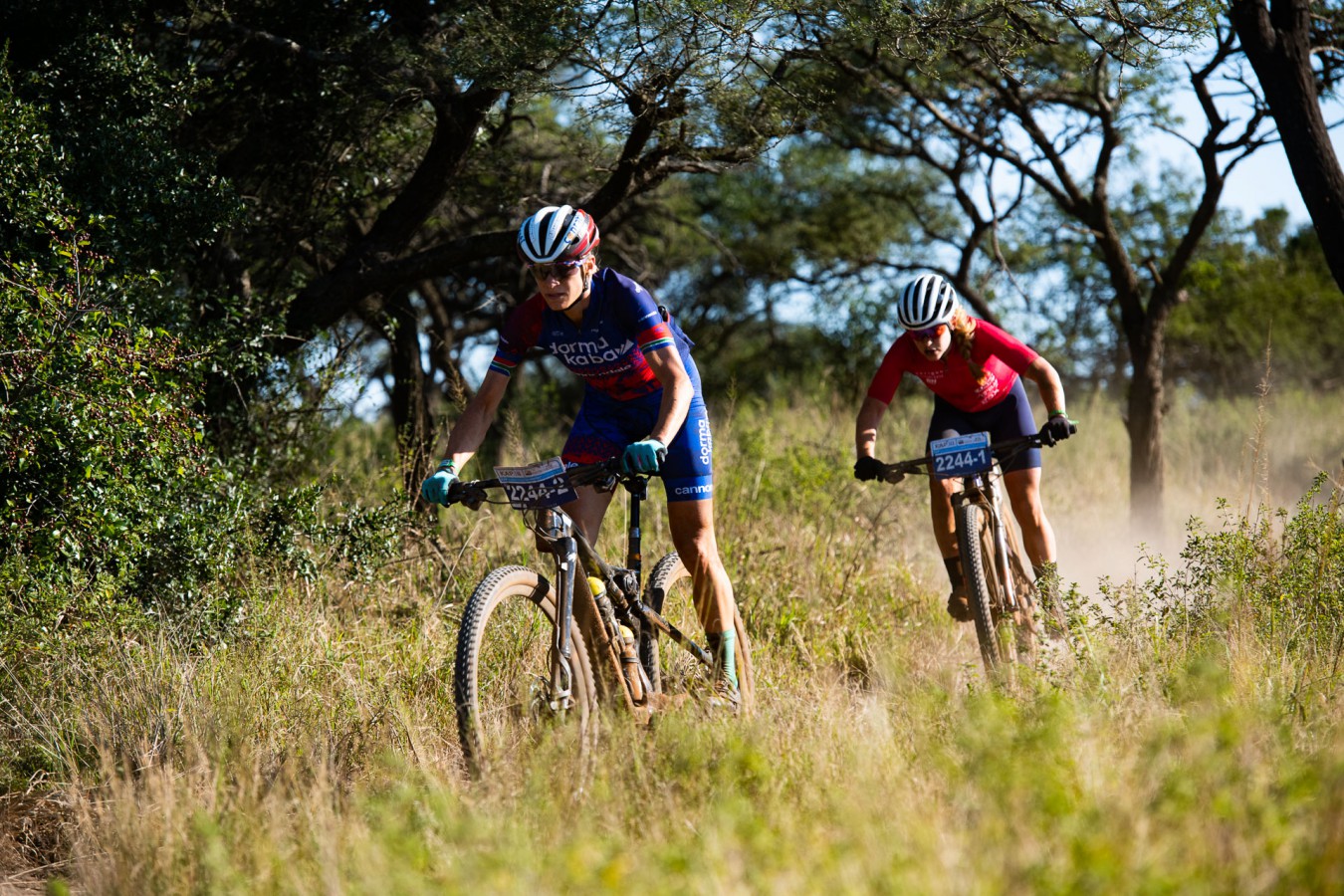 De Groot and McDougall are now nearly 22 minutes ahead in the general classification and only a serious complication could alter the final result.

De Groot says: “We had a successful second day, pretty much trouble free. Unexpectedly we landed up in a fantastic position with a gap at the start, and we just kept going expecting people to catch us from behind, and nobody came. We were pretty much by ourselves for most of the day.”

It’s a monster of a day but such as awesome ride.”

Ralph: “We had technical issues with Kim’s seat and then my chain dropped. That didn’t slow us down too much, and Kim just absolutely went up Iconic. We are happy with the day.”

Le Court: “I found the Umko drop was a bit scary for me today, I couldn’t see the road ahead because of the sunrise and I almost fell very hard, so I was a bit nervous and I think we lost a bit of time there as I went quite slow, but I found my legs at Iconic.”

Danielle Strydom and Janice Venter were third in a time of 04:44:32 (GC 08:39:28). Says Strydom: “It was a good day for us, the first bit of the race we were lying quite well, but somewhere on the single track Theresa and Kim dropped us and we got stuck behind some of the riders. Then they had a technical and we caught up with them, but they were just stronger than us.”