Scottburgh - In some of the most exciting racing across both the men's and women's races at the KAP sani2c it was the PYGA Euro Steel duo of Matthys Beukes and Phil Buys who took the men's crown, while dormakaba's Sam Sanders and Robyn de Groot won a thrilling ladies contest on Saturday. 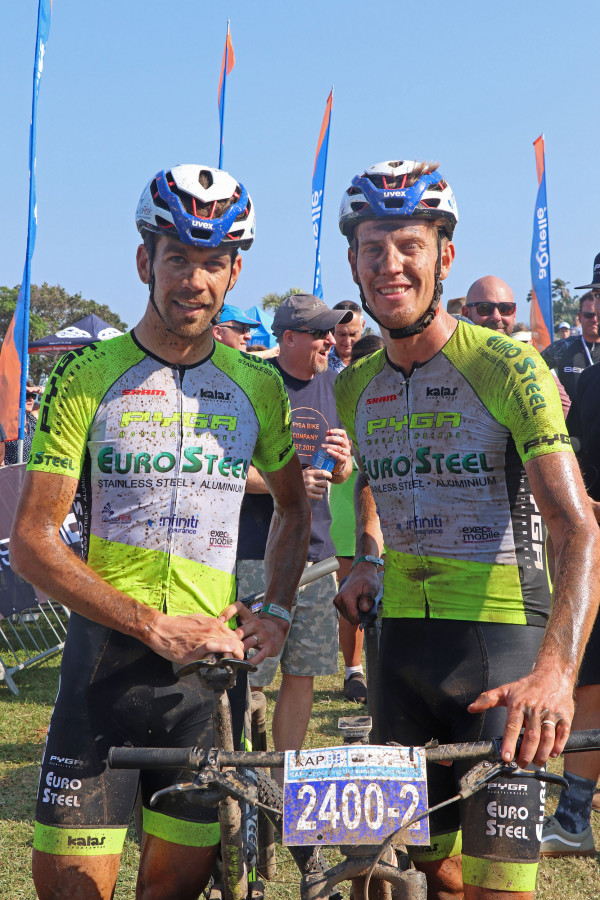 It was a day to savour as PYGA Euro Steel's Matthys Beukes (right) and Phil Buys (left) cruised to their second title in three years at the 2019 KAP sani2c that finished at Scottburgh Golf Club on Saturday.

Despite the difference being just over three minutes in the men's race the PYGA Euro Steel pair of Buys and Beukes held all the cards over the chasing DSV Pro Cycling team of Gert Heyns and Arno du Toit.

The third stage seemed to dish up an adequate amount of drama with the DSV team falling off the pace which opened the door for NAD Pro MTB's Matt Beers and Stuart Marais to push for second spot on the general classification.

Having spent a lot of the time in the wings it was PYGA Euro Steel 2's Pieter du Toit and Philimon Sebona’s time to shine and the pair managed to win the end sprint to take a deserved stage crown.

After working hard to gain the advantage on the second stage, Beukes and Buys knew that they had to maintain a good pace and the victory would be theirs.

"It was a challenging few days and yesterday was the make or break stage so it was quite hard but things went well for us and we could just sit on the wheel today," Beukes said after their win.

"It's great to come away from this with the win and I think that we planned our ride really well and that worked out perfectly for us."

Buys missed out in 2018 but to be back on the top step of the podium in different circumstances to 2017 was a great feeling.

"In 2017 it was flat-out racing all the way to the finish and we had some issues so this year was a lot easier for us," Buys said.

"We are really happy with how the week panned out for us." 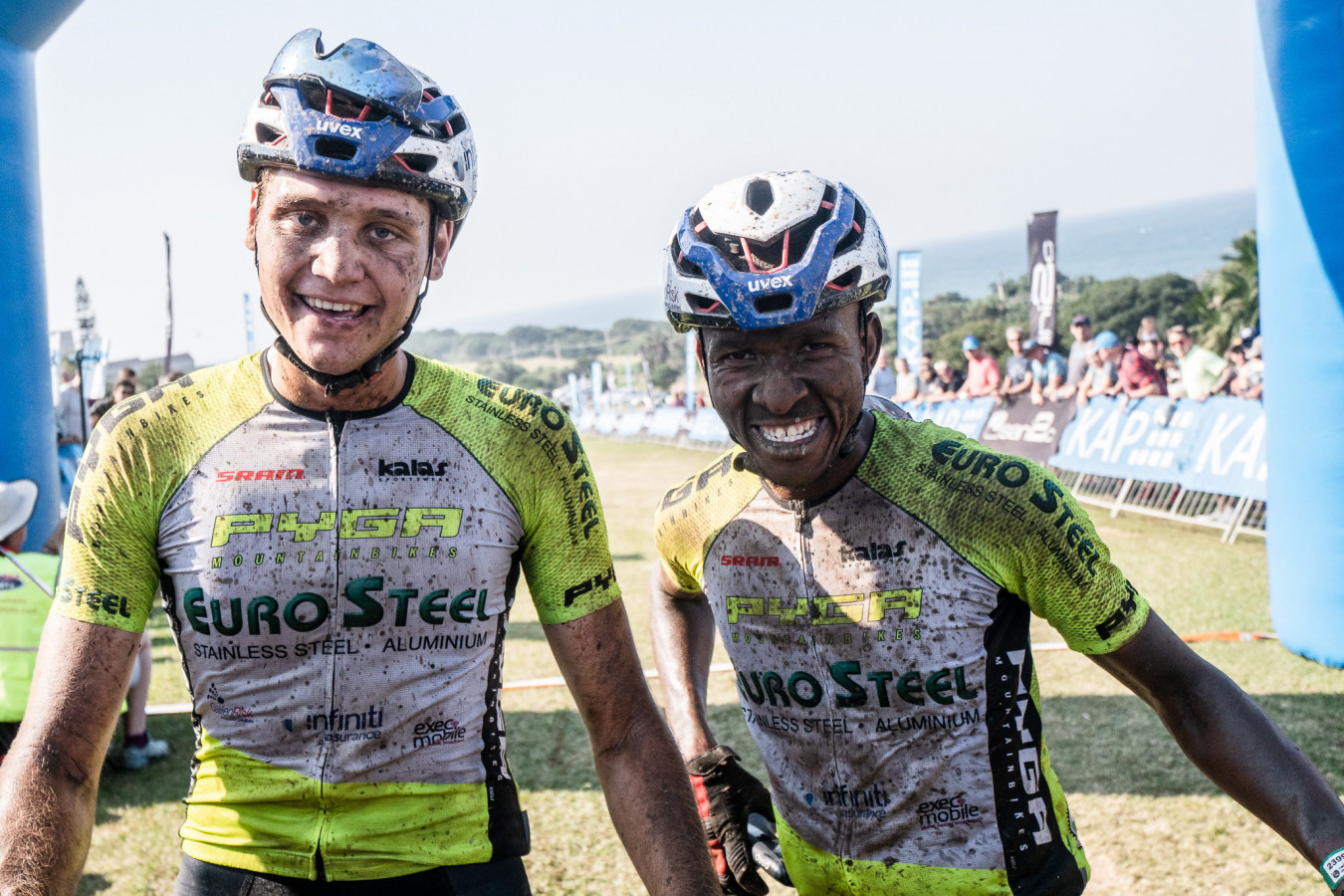 All smiles from the PYGA Euro Steel 2 team of Pieter du Toit (left) and Philimon Sebona (right) after they won the last stage, their first stage win of the 2019 KAP sani2c that finished at Scottburgh Golf Club.

It was a brilliant showing from the young duo of Sebona and Du Toit who came through a tough uphill end sprint to take the stage honours to give PYGA Euro Steel two of the three stages.

Sebona was thrilled with the result and appreciates the team work that PYGA Euro Steel put in to each and every race.

"We gave our best throughout and stayed positive the whole way through the race and to have guys like Matthys and Phil in the team make me a better rider.

"We look up to them and they are a huge help in our development as riders," Sebona said.

With another strong day in the saddle NAD Pro's Beers and Marais took home the bottom step on the overall podium.

The ladies race was as enthralling as it has ever been with the last two stages both ending in end sprints to the line.

It was the Galileo Risk pair of Theresa Ralph and Sarah Hill that just snuck the final stage win to make it two stage wins from three but they needed to bridge a fairly significant gap if they were to take the overall win. 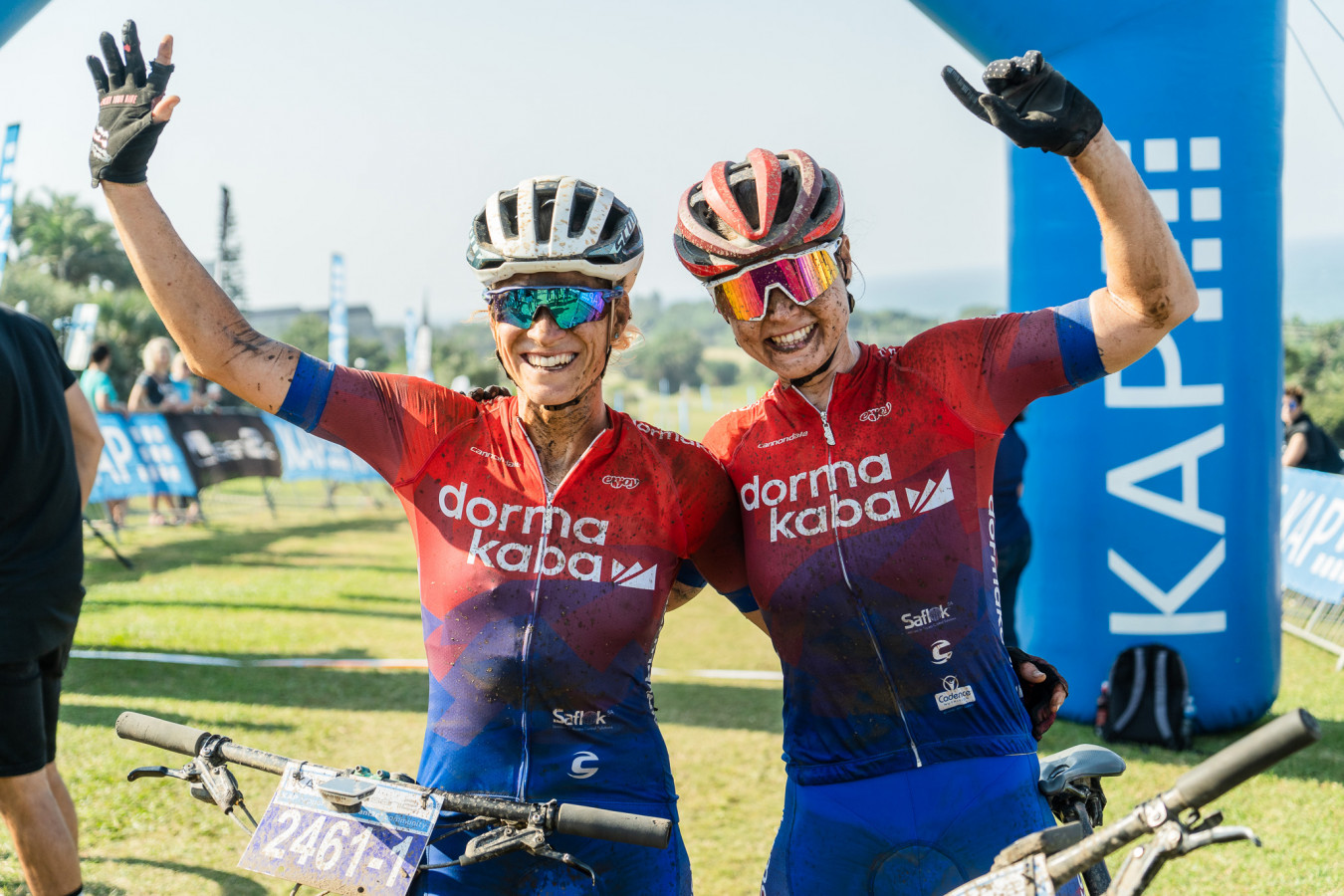 Despite some exciting racing, dormakaba's Sam Sanders (right) and Robyn de Groot (eft) came out on top overall in the ladies race at the 2019 KAP sani2c that finished at Scottburgh Golf Club on Saturday.

Speaking after the stage dormakaba's Robyn de Groot was happy to be racing and is appreciative at how strong ladies racing is in South Africa.

"The level of women's racing in South Africa at the moment is awesome and from a mountain biking perspective I don't think that it has been this high," she said.

"It's so exciting and it also increasing the attention to women's racing and it justifies our push for equality and justifies the effort we put in and the support from sponsors."

With the less than ideal build up Sanders and De Groot were relaxed going into the race and to get themselves on the top step of the podium was a huge bonus.

"We just wanted to see how we went really and to get the win is really special.

"Robs is an incredible athlete and I love riding my bike so irrespective of the situation we are both going to race full taps and that is what we did!"

There was another exciting race in the women's overall standing with Bell Equipment's Hayley Smith and Desiree Verwey taking on Team Bestmed's Kristen Louw and Danielle Strydom.

Saturday's stage seemed a bridge to far for the Under 23 Bestmed team and that opened the door for Smith and Verwey to take the last spot on the podium.

Joanna and Tijl van de Winkel made it three from three when they won the stage for the mixed category.