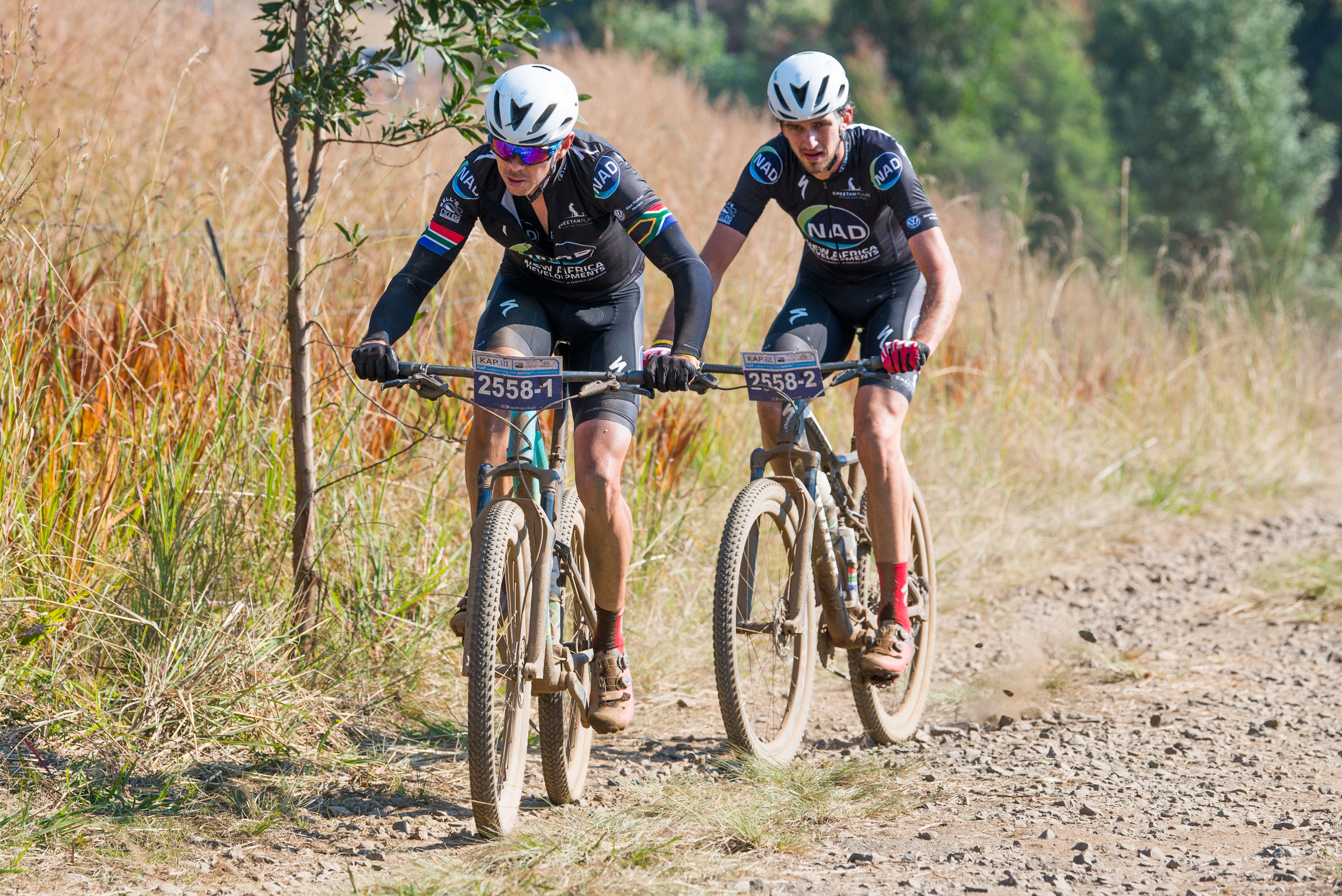 Mackenzie Club – The nervous energy of Glencairn Farm was replaced by the dusty elation of a KAP sani2c stage one win for the Team NAD 1 team of Nico Bell and Matthew Beers on Thursday at Mackenzie Club, with the dormakaba pair of Samantha Sanders and Amy McDougall taking the ladies line honours.

As expected the racing was frantic through the initial district road section with the pace on the front being pushed by all the teams that were dreaming of an opening stage win.

However, in the second quarter of the stage, on the Death Valley climb, the NAD team of Bell and Beers put the rest under pressure and there was no answer to give them a four minute and nine second advantage after stage one.

“I don’t know why teams don’t go hard on the opening stage of the race,” Bell said after their stage victory. “We wanted to put the other guys under pressure and at the train track we managed to open up a gap.”

Drama was a central theme throughout the day’s racing with mechanical’s playing havoc to a number of teams, however it was human error that tripped up the leaders – fortunately for them they recouped quickly.

“I was riding a bit too close to Matt on the floating bridge and took a swim but luckily we didn’t lose too much time as I managed to hop back quickly and we were back up and running.”

After finishing with a final gap of four minutes and nine seconds at the end of the stage, Beers was happy with how things panned out for the him and Bell – considering the swim that they had to deal with.

“Today worked out well for us considering I turned around and there was no one behind us!

“When we got that gap we decided to just drive it from there. Nico and I are really fast so we knew it would suit us but then Nico fell off into the water which was a bit scary because your body goes into shock from the water!

“We only had a 30 second gap at that stage but we managed to regroup and rode hard up the climbs and on the flats – we just tried to keep it constant,” Beers added.

Coming home in second place was the Team DSV duo of Gert Heyns and Arno du Toit after a solid ride despite a few mechanical issues early on in the stage but a strong display of character saw them storm to second overall.

“It was a lot of fun and we pushed hard on the downhills,” Heyns said. “Tomorrow is going to be tough with the time that we have to make up but we are excited to give it a go!”

The opening stage of the race became one to forget for the PYGA/Euro Steel pair of Matthys Beukes and Julian Jessop as constant mechanical issues plagued them throughout, but Beukes’ attitude remained confident as they came home in third place.

“Matt and Nico were just too strong on that first climb for us and they got a good gap there.

“The DSV guys of Gert (Heyns) and Arno (Du Toit) and us rode together for a bit and worked well together and unfortunately Julian dropped his chain a few times which cost us some time but we are quite happy with third.”

From the gun the ladies race was going to be a formality, and dormakaba’s Sam Sanders and Amy McDougall lived up that expectation as they blitzed through the 83km first stage on Thursday.

“We started hard and rode with the front bunch for as long as we could,” Sanders said. “Once we lost the front guys we settled into a good tempo because you don’t want to be out there for hours as anything can happen!

“You don’t want to slack off at any stage but we had a lot of fun and I love racing with Amy because we have a good chemistry.”

The pace that the leading ladies were going at was impressive and when they came through the floating bridge they were comfortably in the top 20 of the race. Their pace was maintained as they finished the stage in fifteenth overall.

“We are both going really well at the moment but we weren’t going wild out there! We were just keeping a fast, safe pace.”

With a substantial gap over second place, complacency is something that Sanders and McDougall refuse to let enter their minds.

“We don’t want to ride beyond our limits because we saw a guy today whose race was over after a fall and we don’t want that to happen to us.

“Going into the rest of the race, we will ride as hard as we can but keep it safe,” Sanders added.

With a 22 minute buffer between them and Andrea de Boer and Hayley Smith in second, the ladies title could be all but sewn up – barring disaster over the next two days.

Finishing a further seven minutes back from De Boer and Smith was the Team Bestmed duo of Danielle Strydom and Kristen Louw.

The mixed race could shape into an interesting showdown over the next two days, with the Team Garmin combination of Yolandi du Toit and Ben Melt Swanepoel finishing stage one with just over two minutes ahead of Cycle Nation’s Joanna van de Winkel and Marcel Rodrigues.

Finishing the opening stage in third in the mixed category were the K&M pair of Christie Hearder and Carel le Roux, just over 15 minutes behind the leaders.

Stage two of the Race takes riders through the toughest stage of the race, 99 kilometres from Mackenzie Club to Jolivet while the Adventure’s final stage is a 82 kilometre stage from Jolivet to Scottburgh. 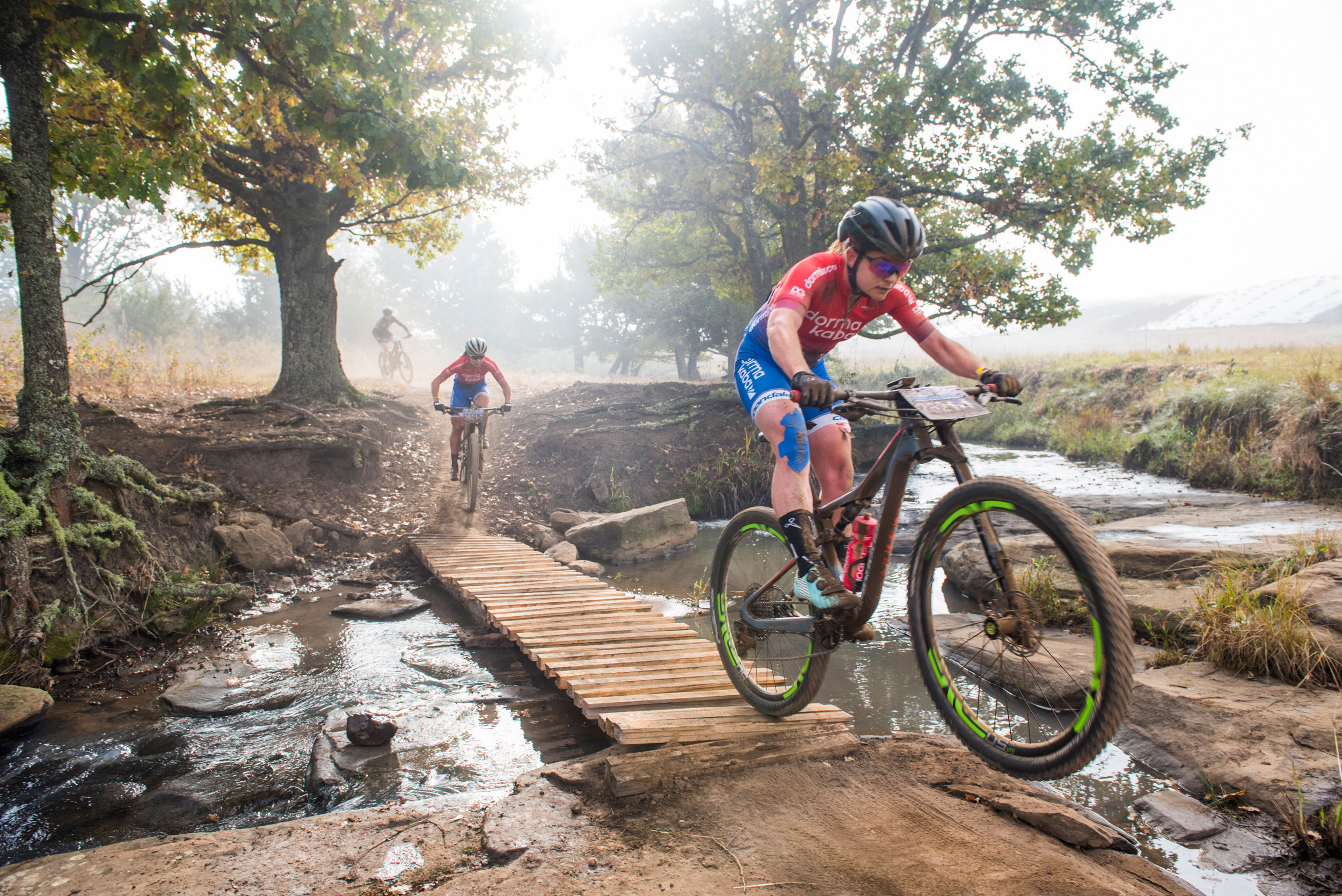