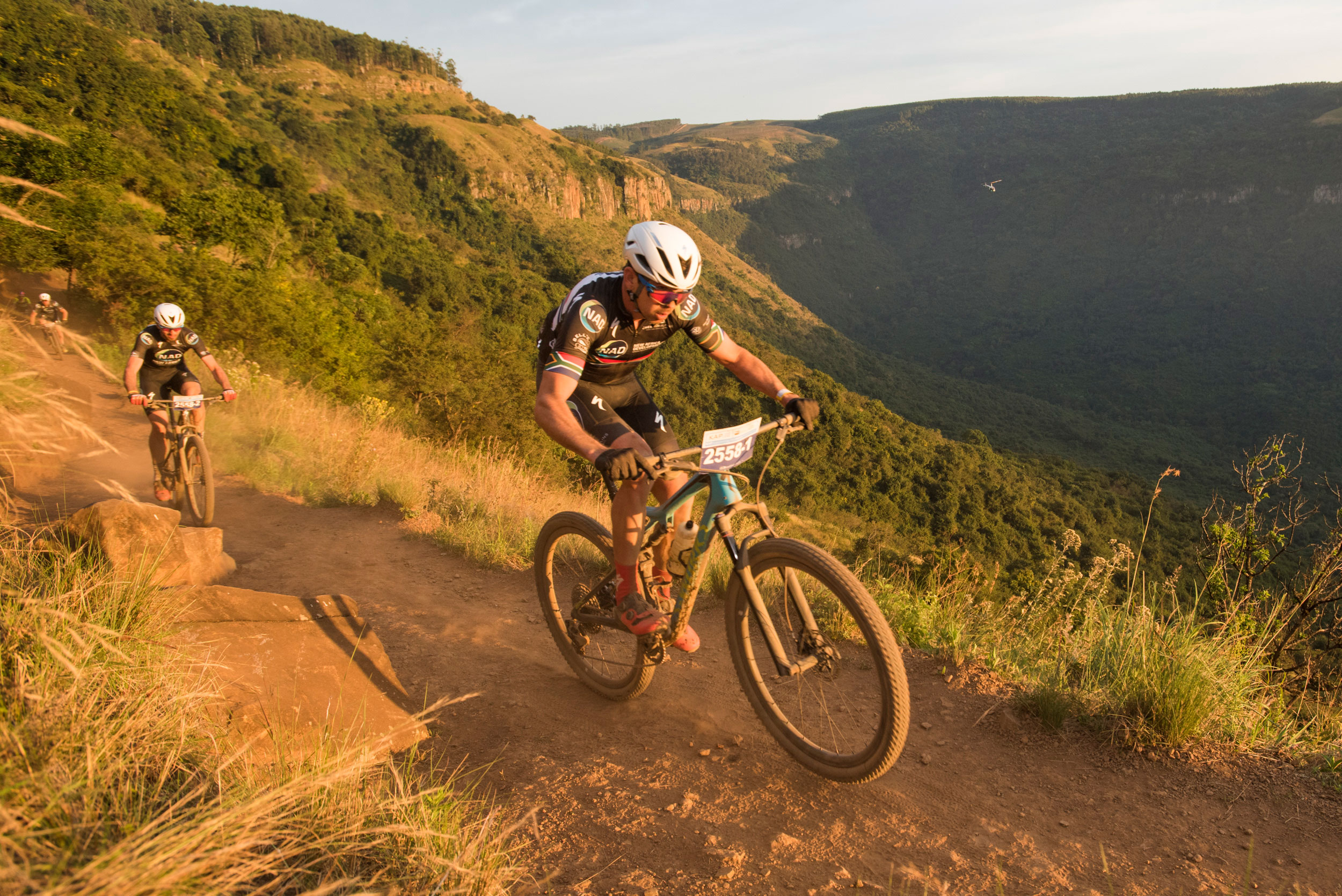 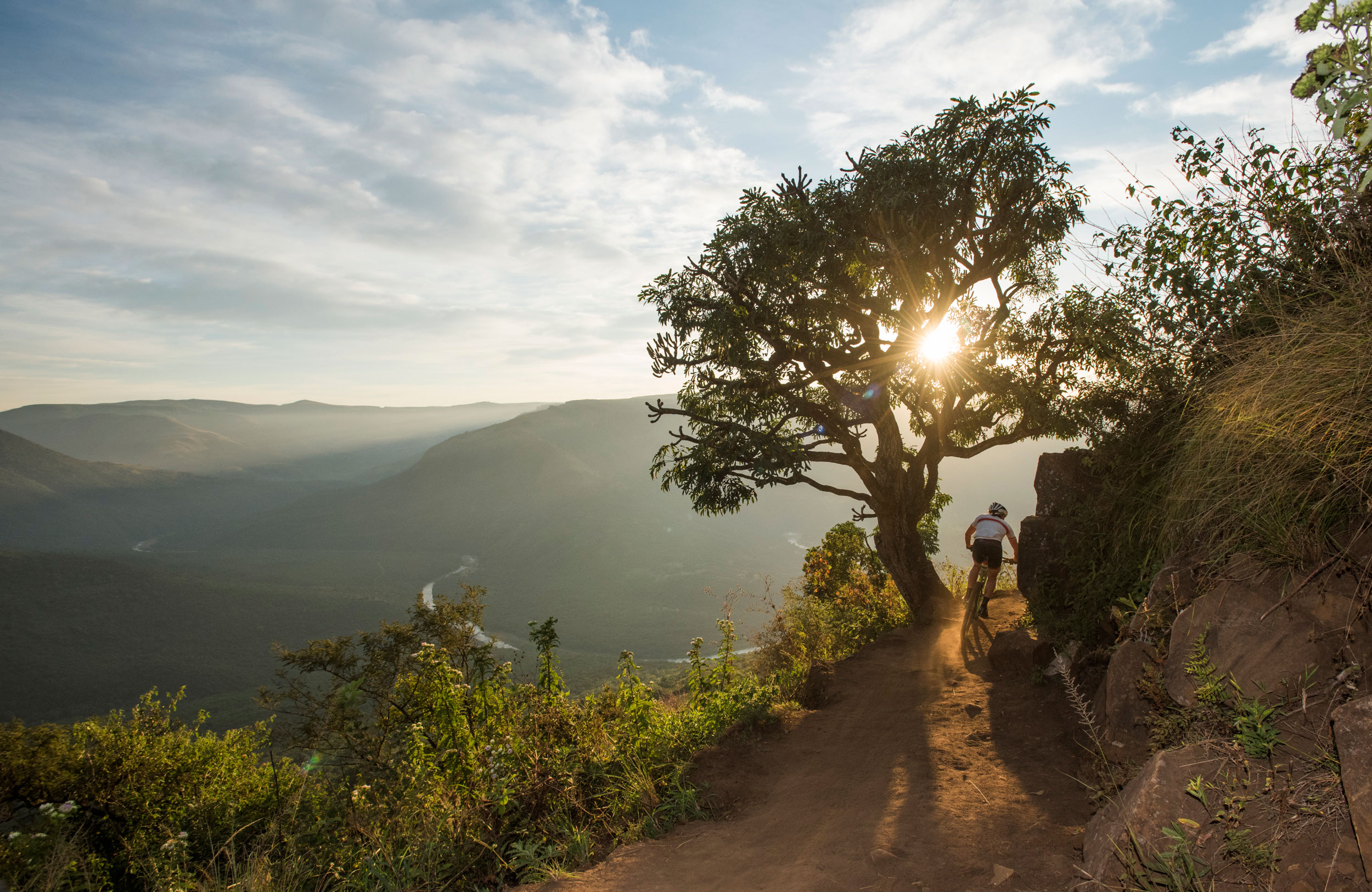 Jolivet – The Queen Stage of the 2018 KAP sani2c was expected to separate the victors from the challengers and both the men’s and women’s overnight leaders, Team NAD 1’s Matt Beers and Nico Bell as well as dormakaba’s Samantha Sanders and Amy McDougall, maintained their advantage over the 96km stage on Friday.

With over 1500 metres of climbing on the second stage, which included the famous ‘Umko Drop’, an element that was lost in 2017 due to the torrential rain experienced, the riders at the sharp end of the field were licking their lips over the prospect of a full 96km shoot out.

Team NAD 1 were once again right up at the front of the race while Team DSV had all of the hard work to do in order to claw back the four minutes that Team NAD had over them going into the Friday's crucial stage.

Beers and Bell remained in control throughout Friday and on the district road following Iconic Climb, them and Team DSV managed to open up a significant gap on the chasers. From there it was a straight shot to the finish at Kings Harvest Academy.

The sprint into the finish is a technical one and Bell, having ridden it at the recent Old Mutual joBerg2c, knew the twists and turns which gave him and Beers the advantage.

“Through the jeep track section there is a bit of an incline and some sharp corners coming into the finish,” Bell explained.

“We turned left into the single track and then I knew that when we came out under the road and onto the tar there was a sharp left and then it curves to the right and I just made sure we stayed in the front.

“Matt followed my lead because he wasn’t too sure but to get ahead and take the stage win in the end was great for us!”

The Team NAD 1 pair were not planning on resting on their lead on the second stage despite the pressure being off them. Their positive approach meant that the heat was on the chasing teams to try and crack the leaders.

“We wanted to get away on Iconic Climb but everyone was pretty well matched there. It was after that that us and the DSV guys managed to get away.

“Once we were clear we knew that we didn’t have to do any of the work and with Nico knowing the end so well we managed to sneak another stage win,” Matt Beers added.

For Team DSV’s Gert Heyns and Arno du Toit, trying to break away from the leaders as early as possible was crucial and despite their efforts they couldn’t shake the blanket that was Team NAD.

“We wanted to push on the Iconic Climb but NAD were with us all the way and they just knew the finish better than us which helped them in the final run in to the line.

“The racing was tough and the stage is quite long compared to day one so we wanted to put some time into the PYGA/Euro Steel guys behind us so we did push quite hard.

“We’ve consolidated our second place but it’s going to be a tough task to catch the NAD guys on Saturday with it being such a short stage,” Heyns said.

Beukes and Jessop maintained their third place position overall ahead of their team mates Sebona and Du Toit.

One of the day two casualties was the fifth place Team TIB/Silverback-Volvo duo of Andrew Hill and Shaun-nick Bester who fell right out of contention and the race very early on the second stage due to Hill's derailleur jockey reel breaking.

Once again, Sanders and McDougall flew out of the blocks and put the peddle down throughout the stage moving up to thirteenth overall, another solid ride from the pair.

“We both just really love riding our bikes!” McDougall said with a smile. “We have been racing hard and despite the competition we have been doing our best and enjoying the trails.

“It’s a big race and it would be awesome to win it. It’s a pity the top girls aren’t here but a win is a win!”

The duo are both staring down a debut win at the KAP sani2c having finished as runners up in 2017, but Sanders is still making sure they get to the finish in one piece.

“We would be so stoked to win but, as they say, it isn’t over until the fat lady sings!

“We’ll still go out tomorrow and race our hearts out and chase the victory as always. But to be in this position is great for us and also to put the dormakaba name out there and give them exposure is also a win.”

The second and third place ladies finished in the same order as day one, however the time difference has decreased with the Team Bestmed duo of Danielle Strydom and Kristen Louw finishing second on the stage.

They narrowed the gap on De Boer and Smith to just over five minutes with the final stage ahead of them.

After two stages of the race, K&M’s Christie Hearder and Carel le Roux remain in third place in the mixed category.

The third and final stage of the Race will take riders 82km through the heart of the KwaZulu-Natal South Coast sugar cane belt from Jolivet to Scottburgh on Saturday. 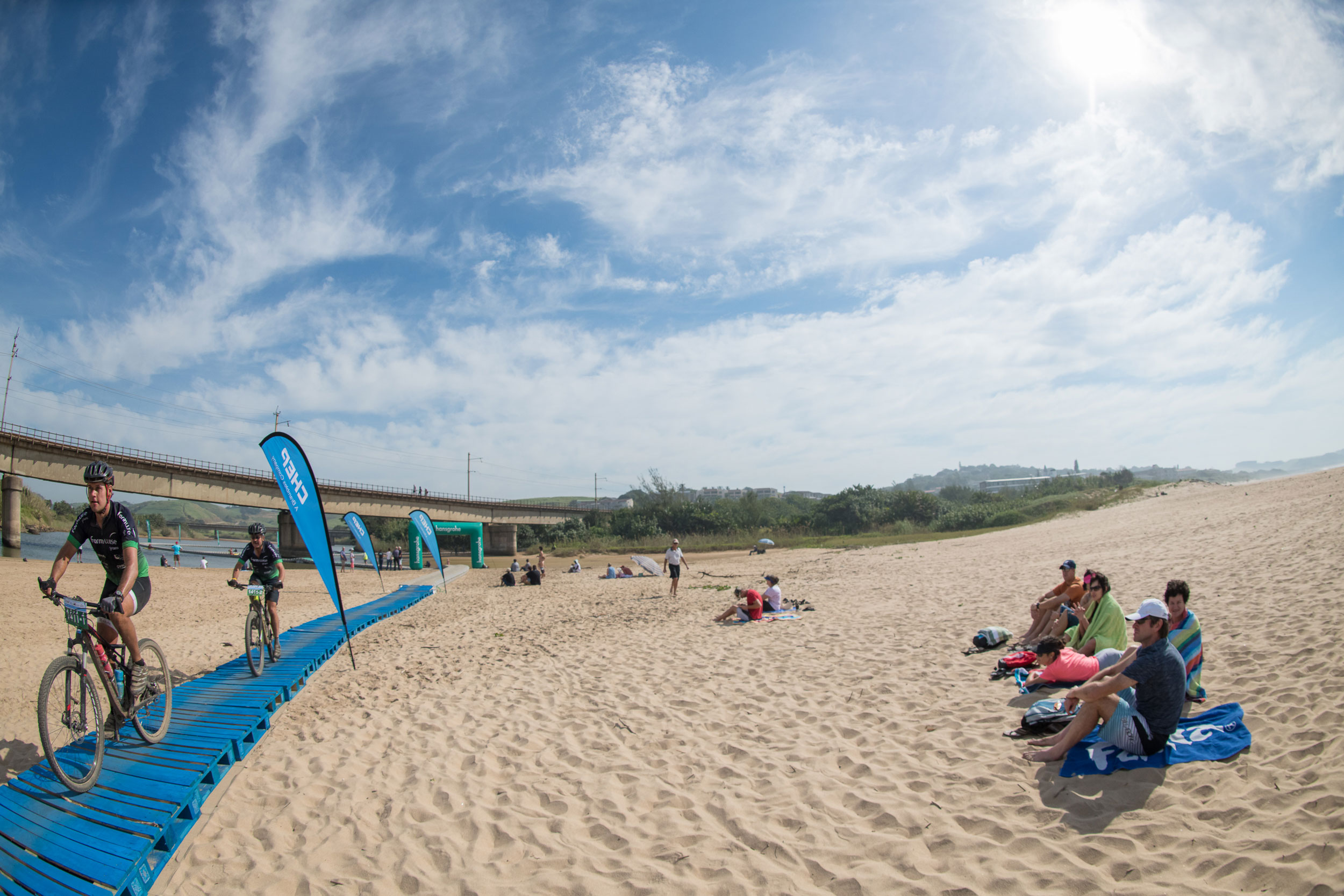